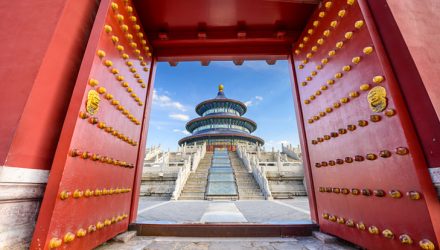 Choosing a China ETF Requires a Look Inside

Yet Deutsche X-trackers Harvest CSI 300 China A-Shares (ASHR), outperformed the above three ETFs in the last three years, climbing 14%. However, $410 million ASHR was up just 5.7% thus far in 2017.

Though ASHR also has its highest exposure to financials (34% of assets) and has a double-digit weighting in consumer discretionary stocks (11%), what’s inside this ETF is different than MCHI. The Chinese A shares market remains restricted to foreign investors, but ASHR offers exposure to stocks that trade on the Shanghai or Shenzhen markets. In addition to a significant stake in banks, similar to MCHI, ASHR has a large stake in capital markets companies such as Haitong Securities. ASHR is not ranked by CFRA due to our lack of valuation assessments of these A shares, but the stocks have above-average Quality Rankings and we view its tight bid/ask spread favorably

A fifth offering, KraneShares CSI China Internet ETF (KWEB 44 Underweight) is smaller than Chinese peers, at approximately $315 million in assets. However, the ETF provides more direct exposure to trends favorable toward the Internet software & services and Internet retail industries (84% of assets combined), such as China’s underpenetrated Internet population yet strong national ecommerce sales. BABA and BIDU are two of the ETF’s top-10 holdings.

These are not the only U.S. listed ETFs offering exposure to China, with First Trust, Global X and VanEck Vectors among the firms with other China-focused offerings. However, as with all ETFs, an understanding of what’s inside remains important.