Although this Strategic View is devoted to emerging markets, Sunday’s French elections are too important for us not to provide a preliminary assessment of the potential impact on financial markets. For the first time in several elections, political polls were correct in forecasting that Emmanuel Macron and Marine Le Pen would advance to the runoff stage of the French presidential election.

A last minute surge by extreme leftwing candidate Jean-Luc Melenchon raised fears that two anti-euro candidates (Le Pen and Melenchon) could be vying for the French Presidency.  Instead, the pro-euro Macron secured an outright victory in the first round, and current polls give him a commanding lead over Le Pen in the runoff election. Global financial markets are likely to breathe a sigh of relief with these election results – equity markets, interest rates and the euro are likely to move higher, in our view. Our portfolios are positioned with the expectation of a positive reaction to these election results. We will evaluate the market reaction and provide further commentary on the French election’s potential impact on our overall portfolio strategy.

Since the financial crisis of 2008, global financial markets have been highly sensitive to growth trends in China. This dependence upon Chinese growth has contributed to financial market volatility over the past several years, especially in emerging equity markets, as China cycled between stimulating growth and then withdrawing that stimulus. We believe that China’s “One Belt/One Road” initiative (also known as the “New Silk Road”) has the potential to break the cycle of alternating acceleration and deceleration in the Chinese economy, and this massive spending program could provide a few years of relative stability for the rest of the emerging markets.

We believe that China’s “accelerate/decelerate” pattern of growth in recent years has been caused by the Chinese economy’s overdependence upon real estate investment. China’s ability to drive growth through ever increasing exports ended with the financial crisis of 2008 and resulting global recession. China reacted to the loss of exports as a growth driver by aggressively stimulating its real estate markets. Real estate buyers were enticed by reduced down payment requirements and lower interest rates, while real estate developers benefited from government mandates that state-owned banks provide ample credit for new real estate projects on attractive terms.

These aggressive stimulus policies eventually create significant imbalances in the Chinese economy.  Smaller, “third tier cities” are plagued by overcapacity and “ghost cities” of unoccupied housing projects.  Larger cities, by contrast, experience potentially dangerous increases in real estate prices and escalating fears of a real estate market bubble. The consequences of these imbalances are compounded by escalating debt burdens, an inevitable consequence of these borrow and build stimulus policies.

In response to these concerns, the Chinese government periodically withdraws its real estate stimulus efforts.  Down payment requirements are increased and banks are instructed to stop lending aggressively to real estate projects. This creates a deceleration in Chinese growth and a China growth scare that is particularly painful as it resonates across smaller emerging economies dependent upon Chinese demand. Eventually real estate activity drops enough to cause China’s leadership to worry about economic growth falling short of highly publicized targets. At that point, real estate stimulus efforts are resumed and the cycle starts over again.

The chart below calculates housing price changes in the 100 largest Chinese cities over the past decade, and clearly illustrates three distinct accelerate/decelerate phases that the Chinese economy has endured over the past 10 years. The cycle works by China reacting to slowing economic growth through major real estate stimulus programs (2009, 2013,2015/2016). This stimulus gets home prices, real estate investment and overall economic activity back on an upward trajectory. As major city real estate prices rise to the point that a bubble is feared (2010, 2012, 2014 and probably 2017) stimulus efforts are withdrawn. Absent government stimulus efforts, real estate prices plunge along with real estate investment, and the overall Chinese economy slows. Slowing growth prompts renewed stimulus efforts, and the cycle begins again. 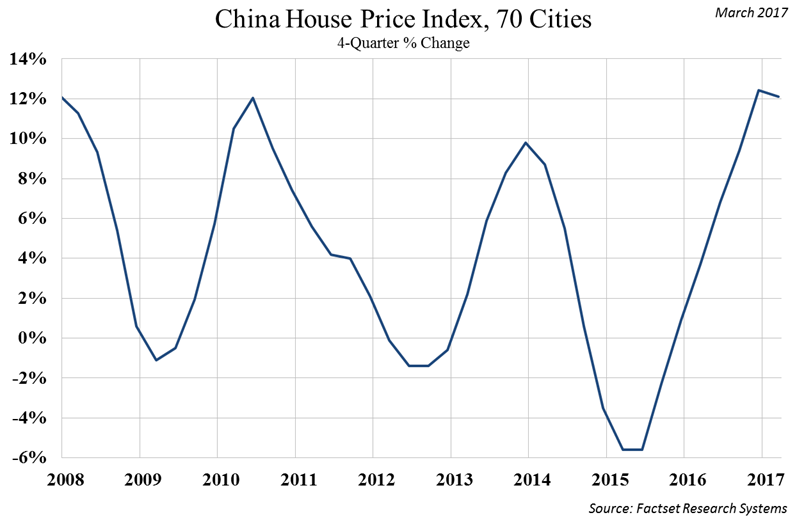 Based on the alarming 18.9% rise in major city real estate prices witnessed over the past year, we expect China to once again take its foot off the accelerator in 2017 and withdraw real estate stimulus policies.  Indeed, we are already seeing increased down payment requirements in China’s largest cities. Historically, we would also be preparing our portfolios for another downturn in the China economy and a potential ripple effect across the other emerging markets. However, we believe that China’s One Belt/One Road program can potentially replace real estate investment as a source of economic growth.  If that happens, then the Chinese economy could, at least temporarily, break free from the “on again/off again” growth pattern of the past 8 years.

In 2014, Chinese President Xi Jinping announced a staggeringly ambitious new foreign policy and economic investment initiative, the One Belt/One Road (or New Silk Road) initiative. The goal of One Belt/One Road is to better connect China with the rest of the global economy through specific infrastructure projects, including enhanced port facilities for shipping lanes and new highway and high speed rail connections for overland routes. New infrastructure projects are intended to connect China north into Russia, south into Southeast Asia and west across Central Asia and Europe all the way to the Atlantic coast. In addition to opening new markets for Chinese products, One Belt/One Road is being marketed as a way for places like Pakistan and Uzbekistan to potentially enjoy an economic explosion similar to the one China has experienced over the past 20 years.

The planned scale of One Belt/One Road is unprecedented, with even America’s post-World War II Marshall Plan paling by comparison. Although the plan initially encountered resistance and roadblocks, new projects have been coming on line fairly rapidly over the past several months and approximately $1 trillion in One Belt/One Road projects are currently under construction.  According to a McKinsey report[1], China hopes to eventually scale the program up to an annual expenditure of $2-3 trillion and intends to maintain this level of expenditure for several years. To put that into perspective, President Trump is targeting an infrastructure plan of around $1 trillion, and that $1 trillion expenditure is expected to be spread out over a 10 year period.

One Belt/One Road is likely to cause China’s debt levels to rise even faster due to the extraordinary levels of borrowing called for under the plan. However, the assets underlying these debts have the potential to be more productive than the real estate speculation that has previously characterized China’s stimulus efforts. Whether productive or not, China’s printing press and captive banking system all but ensure that Xi will be able to borrow the funds necessary to implement his New Silk Road vision.

Strategic Implications of One Belt/One Road

From the perspective of RiverFront’s portfolio management strategies, we do not have to guess whether the New Silk Road will revolutionize the global economy by enhancing growth prospects in struggling parts of the world. Such a long-term positive outcome is a possibility, but so is the prospect that China is building the infrastructure equivalent of the ghost cities we have seen in the Chinese hinterland. There will be plenty of time to evaluate how effectively these trillions of dollars have been deployed and the potential long-term impact on global economic growth. At the moment, all we seek to understand is the short-term impact that this multi-trillion dollar initiative is likely to have on the Chinese economy and the rest of the emerging markets.

President Xi, through One Belt/One Road, has created an almost limitless ability to stimulate the China economy through borrow and build strategies, in our view.  When China builds infrastructure projects, Chinese firms supply all engineering and construction services, and Chinese companies tend to supply all steel, concrete and other manufactured construction inputs. In many instances even the construction workers are flown in from China. Thus, One Belt/One Road projects directly stimulate the Chinese economy no matter where the actual construction takes place. However, unlike borrowing and building in Chinese real estate, we do not think One Belt/One Road projects will create the same imbalances in the Chinese economy. China may, therefore, be able to provide more consistent economic stimulus and avoid the periodic growth scares that have plagued China and the rest of the emerging markets in recent years.