You are at:Home»Equity ETFs»Will the “Trump Bump” Continue to the End of 2016? 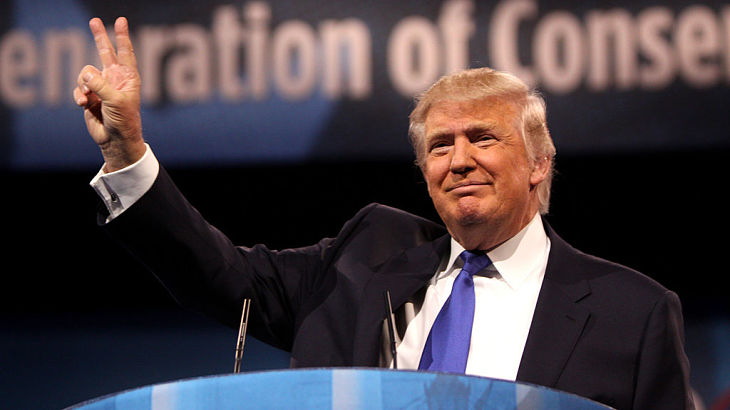 The recent rally, or “Trump Bump”, that has been powering the stock market over the last several weeks, continued to boost equities higher last week with all three major stock market indices climbing another 2.9 to 3.3 percent.

That move in the Dow is thanks in large part to just one stock, Goldman Sachs (GS), which has an 8.4 percent weighting in the index. Having gained a mind-boggling 32 percent since the election, Goldman is responsible for roughly 1/3 of the index’s advance. On the one hand, we are not ones to complain about the move given the positive impact it’s had on a number of position on the Tematica Select List. That being said, the sum total of the last several weeks that has pushed the S&P 500 into record-breaking territory with 14 new highs since the Election Day 2016, has pushed all three of those major market indices into overbought territory as well. This has also led the Fear & Greed Index by CNN Money to catapult higher over the last month from a reading of 42 (Fear) to the current 87 (Extreme Greed).

Generally speaking, when we see such pronounced moves in the market, we tend to become a little cautious, particularly if valuations for most stocks have escalated the way they have in recent weeks. Will this Rally Continue to the End of the Year?

With just a couple of weeks left in the year, the biggest known potential risk to the current rally stalling out comes at us this week is in the form of the Fed’s last FOMC meeting of 2016. Recent economic data, such as last week’s November ISM Manufacturing Index and this week’s November ISM Services Index, have bolstered the case for a 25 basis point increase by the Fed come this Wednesday. We’d argue the stock market has baked that expectation into the market’s cake – just look at the move in financial stocks given the 22 percent move in the Financial Select Sector SPDR Fund (XLF) since early November. While some of that move reflects the expectation for financial regulatory rollback, it also has something to do with prospects for better net interest margins as interest rates rise and the yield curve steepens.

With the stock market overbought and the CBOE Volatility Index (VIX) not too far off its 52-week low, any unexpected move by the Fed, such as a 50 basis point rate hike instead of 25, could see the market get a little jiggy. While a 50 basis point hike is plausible, we would say its probability is rather low given the dovish tone of the Fed. Fallout After the Italian Referendum

The other wildcard to watch as we kick the week off will be the fate of Italian bank Banca Monte dei Paschi di Siena SpA. The European Central Bank rejecting the bank’s request for more time to raise capital, following the political uncertainty that has emerged given Prime Minister Renzi tendered his resignation last week. One of the core issues at hand for regulators and policy makers is containment in order to avoid contagion across other Italian banks as well as those in the Eurozone — particularly the most systemically dangerous Deutsche Bank (DB), which has seen its shares lose nearly 25 percent this year alone and were down another 4 percent last Friday.

Barring any such stronger-than-expected action by the Fed and any Italian bank drama, we are inclined to think the market will continue to move higher through the end of 2016. While some may attribute this to an early start of what’s likely to be a Santa Claus rally, the reality is there is a distinct lack of selling pressure in the market. While it may be somewhat simple, we have to ask why would investors sell shares now when the odds are pretty good we will have some tax overhaul that is retroactive back to January 1, 2017, that could materially reduce taxes on their gains?