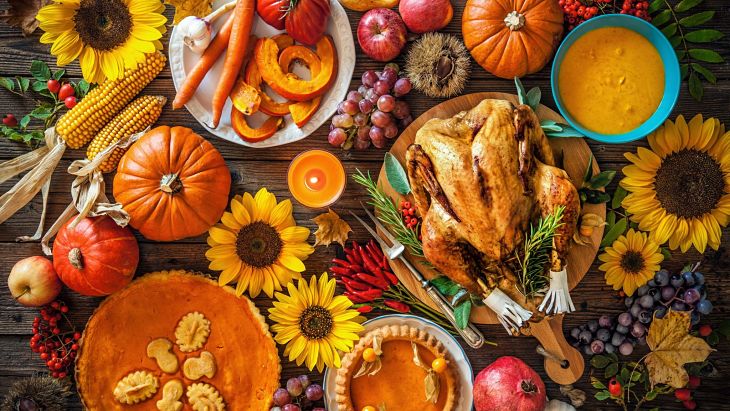 From the Trump Trade to Turkey Day and Holiday Shopping

The post-election market rally, which has been coined by many as the “Trump Trade”,  continued last week leading to additional gains in all of the major market indices.

Even after what looked to be a Friday fade in the market, the last 8 days have led to an overall pronounced move in the market, especially in the Dow Jones Industrial Average and the Russell 2000 — both of which have now firmly moved into overbought territory. The S&P 500 too, while not overbought, is within striking distance of its 52-week high, which as we enter this holiday-shortened week means that index is trading at nearly 18.5x expected 2016 earnings.

Viewed in tandem, we are likely facing odds better than 50/50 of the market giving back some ground after such a quick move higher. Factor in the Thanksgiving holiday and lighter that usual trading volume and those odds shift even further in favor of at least some retrenchment.

If the official start of the 2016 holiday shopping season underwhelms, the odds tick even higher.

Digging into that report as we like to do, we discover where consumers were really spending during October. Compared to October 2015, retail strength was registered at nonstore retailers (+12.9%), health and personal care stores (+8.3%), building material and garden (+6.5%), which outpaced overall retail sales gains of +4.3% (+4.0% if we exclude autos). The two categories that continued to post year-over-year declines in sales were department stores (7.3%) and electronics and appliance stores (4%).

Our take on the above, and juxtaposing the performance of nonstore retail vs. department stores and electronics and appliances, is that it’s yet another data point for the accelerating shift toward digital commerce at the expense of bricks-and-mortar stores. Yes, we said another data point, because when we take a longer-term view, the shift is rather striking.

Over the trailing three-month period of August to October 2016 vs. the same period in 2015, we see nonstore retail sales rose more than 12% year over year vs. declines of 6.7% and 4.3% for department stores and electronics and appliances, respectively. Longtime readers will no doubt recognize this is a positive for our Connected Society and Cashless Consumption investing themes.

Last week we also received the October reports for the Producer Price Index and Industrial Production as well as Capacity Utilization, and all three show there is room to run when it comes to the economy and the Fed’s interest rate hike triggers. It’s hard to argue the economy is overheating when total industry capacity utilization in October (75.3 percent) registered lower than vacation filled August (75.6 percent). Those reports were followed by Fed Chairwoman Janet Yellen’s testimony before congress, which in our view was once again as clear as mud served up with a helping hand of “if”, “maybe”, “perhaps” and “data.”

We’ve gathered our Dick Tracy decoder ring, 007’s infamous watch, an I-Spy beeper and even trotted out a Magic 8-ball to help see through that verbal mud the Fed Chair dropped in Congress last week. In doing so, we once again find that context and perspective shed some light on what was really being said.

Back in September, the Fed stated that “household spending and business investment have been increasing at solid rates in recent months.” The FOMC’s statement on Nov. 2 shifted to “household spending has been rising moderately, but business investment has remained soft.” When Fed Chair Janet Yellen testified before Congress last week she made the following statements, which we’ve all of our insight and gadgets to translate for your reading pleasure.

“The stability of the unemployment rate, combined with above-trend job growth, suggests that the U.S. economy has had a bit more ‘room to run’ than anticipated earlier.”

Translation: The labor market is not yet overheating, so no pressure from here to raise rates.

“The unemployment rate is still a little above the median of Federal Open Market Committee (FOMC) participants’ estimates of its longer-run level, and involuntary part-time employment remains elevated relative to historical norms.”

Translation: There is still slack in the labor market, so further emphasis on lack of pressure.

“…business investment has remained relatively soft, in part because of the drag on outlays for drilling and mining structures that has resulted from earlier declines in oil prices. Manufacturing output continues to be restrained by the weakness in economic growth abroad and by the appreciation in the U.S. dollar over the past two years. “

Translation: Still not happy about the corporate part of the economy.

More importantly, Janet Yellen points out that a strong dollar is a headwind to parts of the economy. Remember, if the U.S. raises rates and other major economies leave theirs as is or reduce them, all else being equal, the dollar would strengthen. A strengthening dollar is a deflationary force because it reduces the effective price of imported goods and services and the dollar has already appreciated over 8% just since May.