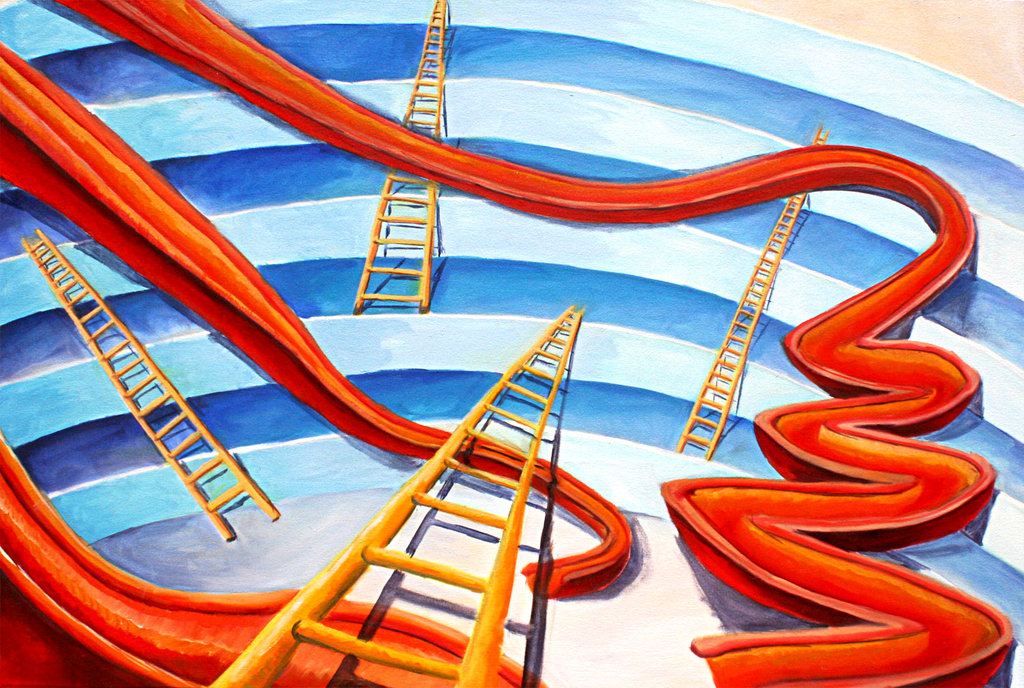 Chutes and Ladders is a child’s board game, based on a 10 by 10 grid numbered 1 to 100. Children are rewarded for good deeds by advancing up the ladder and drawing closer to the winning #100 square. Bad deeds cause you to go backwards, sliding down the chutes toward the beginning of the game at square #1.

In the game, there are nine ladders and 10 chutes. Let’s examine the issues facing the Fed within this simplistic construct.

Ladders: Taking You to the Land of Normalized Rates

Chutes: Taking You to the Land of Negative Rates

In the child’s game, your odds of beating your opponent are pretty close to 50/50. In the Fed’s game, more chutes seem appear everyday instead of ladders to climb to normalized rates.

Chutes Outnumber Ladders: What’s a Fed to Do?

In our view, the May jobs report really surprised the Fed. The Fed was trying to signal a possible rate increase at the July interest rate meeting. In fact, as recently as the end of May, Fed Chair Yellen had indicated interest increases could happen “in the coming months.”

However, the 38,000 private sector job growth in May changed everything. Yellen’s press conference after the number was announced was uninspiring and lacked confidence. She mentioned the word “uncertain” numerous times.

On June 17th, a surprise came from St. Louis Fed President James Bullard, when he announced a white paper on a new forecasting model. This model saw maybe one interest rate increase through 2018 as an appropriate course. This is just another signal that “lower for longer” is the rule.

Related: Gain Over Pain: Helping Investors Stay in the Game

A bond is a way to provide a series of cash flows over a set number of years. As bonds mature you re-invest at the longer end of the ladder and supposedly get a higher interest rate. On June 17th, if you were a German bond investor, you were faced with buying a bond ladder providing negative interest rate returns for 10 years. No coupon payments for 10 years. Your return is based solely on price appreciation which actually does happen if rates keep going further and further into negative territory.

I would suspect a buy and hold approach in a negative rate environment won’t do so well when rates return to positive territory.

Britain voting to leave the EU created market turmoil. There was a swift devaluation of the British pound. The equity markets sold off and gold soared. This was the short term reaction and it would be premature to make a macro call on the long term implications of Brexit.

A short-term assumption is that this will be another obstacle in global growth and spark yet another round of accommodative monetary policy from the world’s central banks. Our Fed is really in a difficult position with the dollar soaring after Brexit. The Fed’s response will probably be cautious and hold off interest rate hikes for the next few quarters.

The interesting response will be from the European Central Bank. The second quarter is ending with negative two-year rates in France, Germany, Italy, Spain, Sweden, Netherland, Switzerland and Japan. Of that group, only Italy and Spain have five-year interest rates above zero. The Mario Draghi zero interest rate policy has gone beyond free money into negative interest rates. It’s almost Marie Antoinette-ish as he shouts from the rooftops, “Let them eat credit!!”

Negative Rates: A Chute the Fed Cannot Place into the Game

To end a game of Chutes and Ladders, the child must land exactly on square #100. It appears the Fed was trying to have everything land perfectly on square #100 and missed their chance to raise rates earlier in this economic cycle.

Now we have the new chutes of the May jobs report, Brexit, and negative interest rates, and a Fed with one interest rate cut available to them (or maybe a QE4?). Lower for longer seems the way it is for now.