Leveraged and inverse exchange traded funds (ETFs). Just mention those words, and you’re likely to receive an earful about them. Investors have strong feelings about these funds, ranging from anger to confusion to loving them for what they can do.

What Are Leveraged and Inverse ETFs?

Most leveraged and inverse ETFs have an objective to provide a daily multiple, for instance, plus or minus 200%. In a double leveraged inverse ETF, if the underlying index loses 1%, on any given day the ETF should in theory gain 2% that day. The funds have a daily target for a few reasons, according to ProFunds:

These funds can be appealing to investors with the risk appetite for several reasons:

So, What’s the Problem?

The chart below is the one-day performance of RSW vs. the S&P 500: 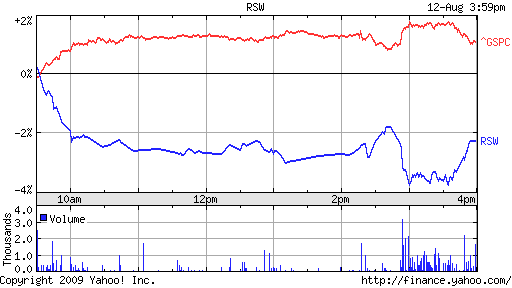 For example, in 2008, the financial sector was one of the most ravaged. By the end of the year, plain-vanilla ETFs that tracked the sector were down 50% or more. When all was said and done, the iShares Dow Jones U.S. Financial (NYSEArca: IYF) had lost 50.5%, while the ProShares UltraShort Financials (NYSEArca: SKF), which tracks the same index, had gained 3.6%.
This chart shows the 2008 performance between SKF and IYR. 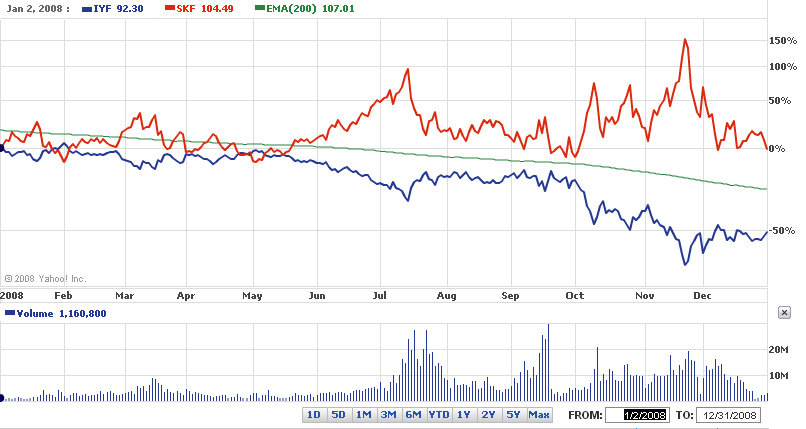 While throughout the course of the year, SKF increasingly drifted from its benchmark, the funds performed as advertised. That is, they correlated on a daily basis. As an example, on July 8, SKF gained 2.9% while IYR lost 1%.

In July, the Financial Regulatory Authority (FINRA) issued a warning about leveraged and inverse ETFs, reminding brokers to be mindful of the suitability of products they offer their customers. FINRA also stated that these ETFs do track their targets on a daily basis, but fail to correlate over longer periods.

FINRA has since backed down from its statement directed at professional investors, but not before several brokerage firms banned the sale of these types of ETFs. Edward Jones, Ameriprise Financial, Raymond James and UBS banned them, while Morgan Stanley is reviewing them.

In August, both FINRA and the Securities and Exchange Commission (SEC) issued a joint statement aimed at retail investors, which said:

“These products are complex and can be confusing. Investors should consider seeking the advice of an investment professional who understands these products, can explain whether or how they’ll fit with the individual investor’s objective and who is willing to monitor the specialized ETF’s performance for his or her customers.”

These warnings are ultimately a good thing, because investors need to know the risks before they buy. The SEC and FINRA have clearly teamed up to boost the awareness effort. That doesn’t mean that leveraged and inverse ETFs are evil, though. There are warnings on Q-Tip boxes, too, but plenty of people use them every day without hurting themselves.

What Volatility Means to Performance

ProShares’ volatility study compared the standard deviation of the S&P 500 index constituents, as well as the standard deviation of the hypothetical 2x S&P 500 fund in each calendar year from 1999 to 2008. The hypothetical S&P 2x fund, in fact, is less volatile than 39% of the components of the S&P 500 index and the volatility in this fund is comparable to a number of other non-leveraged ETFs.

All in all, ProShares Managing Director of Marketing Steve Cohen says, leveraged and inverse funds have been around for years and it’s only now that they’re under the gun. “These are not new products. For 15 years, they’ve worked well.”

ProShares’ study also examined the impact of compounding when leveraged and inverse ETFs are held for periods longer than a single day. The common belief is that because of compounding, over time returns will be significantly lower than the one-day target. This, over time, chips away at a fund’s performance.

However, compounding works both ways. In both up and down markets, compounding can work in an investor’s favor. The negative impact is really evident in markets such as those in 2008-2009, when record volatility hit the funds, Cohen says. But you can’t just judge these products based on the last year in the markets.

Compounding turns two consecutive gains of 10% into an overall 21% return. It works on the downside in a 2x fund, as well: two consecutive days of 20% losses will translate into a 36% loss through compounding. ProFunds’ study revealed several interesting points about compounding:

Even over longer periods, there’s a generally high likelihood that an investor would get close to the 2x index return as illustrated in the chart below: 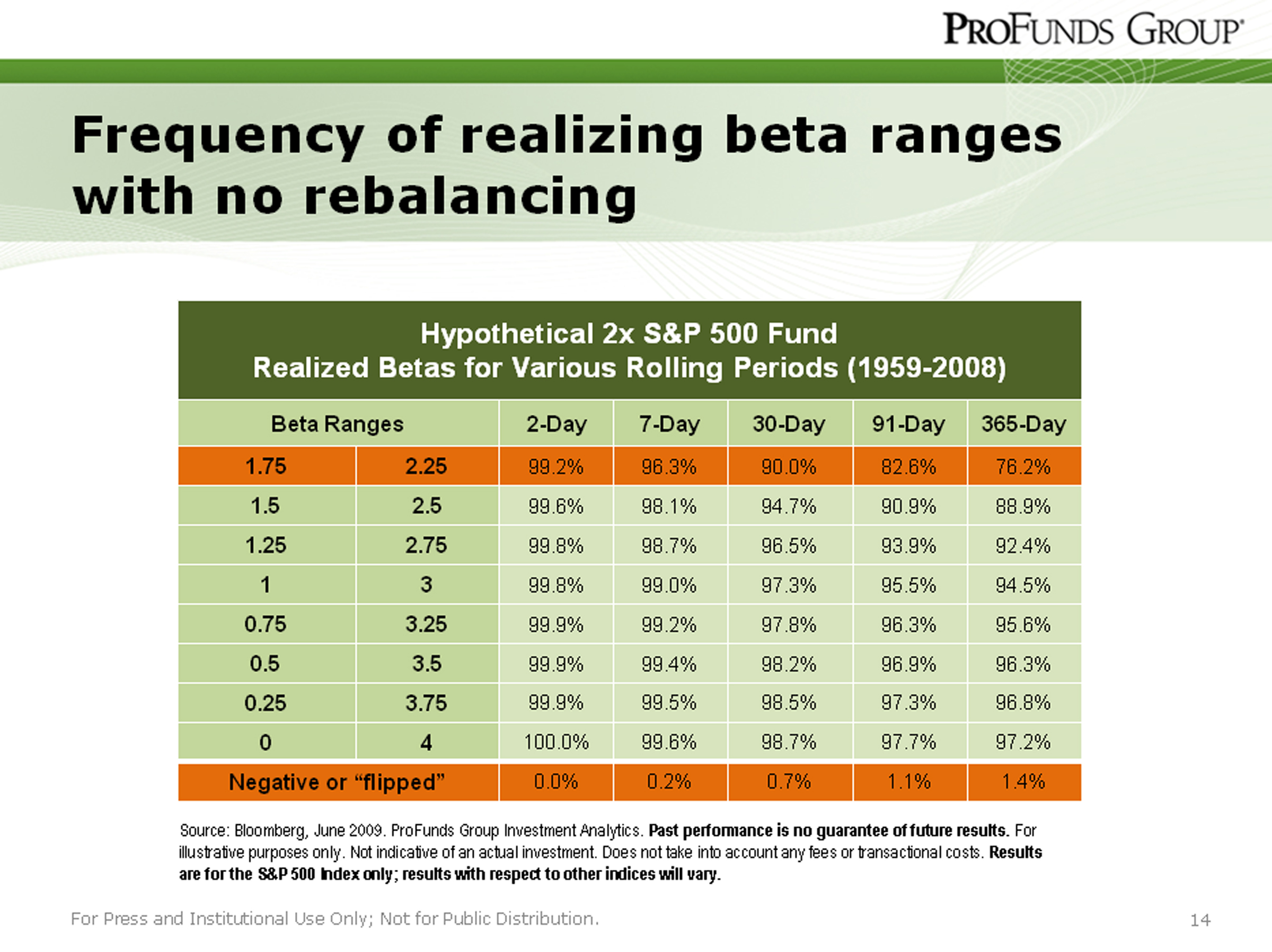 Are the Bans Justified?

We recently asked our readers whether they thought the regulatory scrutiny of leveraged and inverse ETFs was justified. While many investors may seem divided over the issue, our poll showed otherwise:

Rick, an ETF Trends reader, left a comment on the poll in defense of the funds:

Nobody is forcing anyone to use them against their will. And I say this even though my last trade (FAZ) was a big loser. Hey, you can’t win them all. When the opportunity is right (for me), I plan to use a leveraged (or inverse leveraged) ETF again.

There’s a lot of information about leveraged and inverse ETFs out there right now, much of it inaccurate, confusing or just wrong. We’ll sort it out for you:

Misconception: Leveraged ETFs Provide Returns of 2x and 3x the Annual Return of the Underlying Index

This myth seems to be one of the biggest misconceptions surrounding leveraged ETFs and one that may be at the root of much of the ongoing strife. Perhaps the result of poor marketing, the truth is no leveraged ETF or exchange traded note (ETN) seeks to provide a multiple of the annual return of an underlying index.