Why Technology/Networking ETF Is Connecting

During market downturns, there are certain sectors that do well despite the carnage in the broader market, and some exchange traded funds (ETFs) represent these sectors with standout performance numbers.

Gary Gordon for ETF Expert selects the iShares Networking Fund (IGN) for his “sleeper hit” pick. The fund has shot up 42.5% over five weeks, a nice move higher in these turbulent times. The S&P 500, in contrast, is down 4.9%. Gordon makes the following arguments in favor of the sector:

The tech sector overall has been a standout, with most ETFs focused on that area in positive territory. The tech sector is seen to be playing a defensive game nowadays. Companies are seen holding large wads of cash. It has been shown that in deflationary times, value of debt remains constant, but value of assets declines. So the tech companies with good balance sheets and heaps of cash will endure. 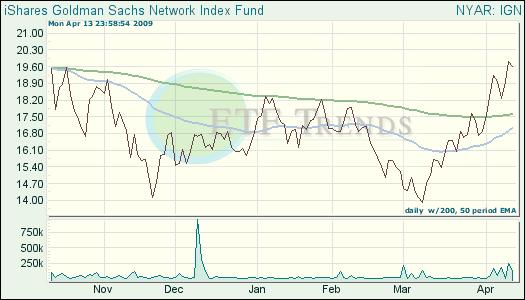