What ETFs Could Score a Super Bowl Touchdown?

Believe it or not, many companies are still spending millions for Super Bowl Sunday advertisements, giving some life to markets and exchange traded funds (ETFs) in the meantime.

The Super Bowl Sunday competition is not necessarily pinned to the two teams, this year the Pittsburgh Steelers and the Arizona Cardinals, rather, there is a while jockeying going on behind the scenes between the advertisers. Rob Walker talks to Kai Ryssdal for Marketplace and says the price begins around $3 million for 30 seconds of air time.  This is a lot of money to be dealing with amid the recession, so what gives?

Prices are breaking all-time records and companies know that this is one huge forum, a gathering of million of American families. Advertisers also know that the ad itself isn’t so much the focus, rather the hype both before and after is. Pedigree, Budweiser and the Clydesdales are among the competition. Maybe a key indicator to watch is the way the economy fares now and the impact this will have on 2010’s Superbowl, reports Mark Koba for CNBC News.

Corporate America is still going, as they are making appearances at Superbowl as well, according to one firm selling packages of hotel rooms and services for the game. Bruce Springsteen is the half time entertainment scheduled this year at half time. Wal-Mart (WMT) is one company already trying to get in on the Super Bowl action by cutting prices on HDTVs, says Gina Francolla at CNBC.

If consumers bite, it could help the Retail HOLDRs (RTH), which contain 26.9% of Wal-Mart. 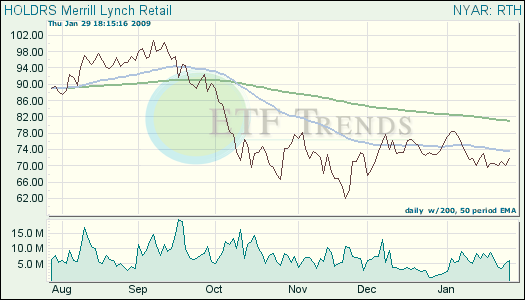 And don’t forget the food! If the tradition of stuffing ourselves silly while watching the big game continues, the PowerShares Dynamic Food & Beverage (PBJ) could benefit. 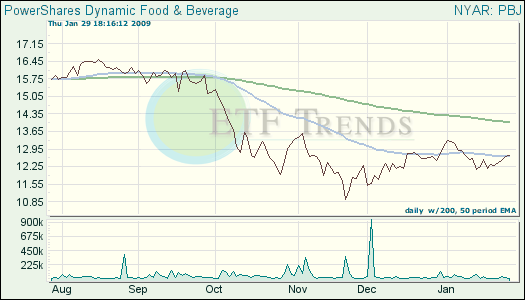