Which ETFs Could Be Impacted by Wall Street Fraud?

The Bernard L. Madoff scheme is fresh from discovery and the list of affected companies and investors is growing, meaning the list of potentially impacted exchange traded funds (ETFs) could grow, as well.

A suspicious bank that had smelled the suspicious activity a while back, Société Générale (GLE), allegedly kept their suspicions to themselves, although the red flags at Madoff’s firm were so obvious, said one banker with direct knowledge of the case.

The bank saved themselves millions, and the embarrassment, with its total exposure to Madoff’s supposed Ponzi scheme at less than $13.8 million, reports Nelson D. Schwartz for The New York Times. BNP Paribas and HSBC Holdings are all burned, taking huge losses and spreading the misery across Europe.

Large banks like HSBC and the Royal Bank of Scotland loaned more than $1.5 billion to money management firms, which leveraged larger returns on their investments with Madoff. These banks received collateral for their losses in the form of assets from Madoff’s firm, which is likely worth nothing now. 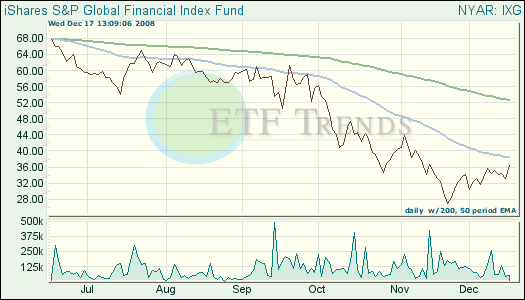