ETFs May Raise Their Mugs to InBev and Anheuser Pairing

Belgium brewer InBev is seeking a takeover of Anheuser Busch (BUD), creating a massive beer brewer for the world, and a reason for exchange traded funds (ETFs) to raise their mugs.

If the deal takes place, will the Clydesdales fly to Belgium first-class, or is coach acceptable?

If the two giants can come to terms, it would end the hostilities between them and create the world’s largest brewer, report Andrew Ross Sorkin and Michael J. de la Merced for The New York Times. InBev, maker of Stella Artois, Beck’s and Bass, would join Anheuser, maker of Budweiser, in major distribution channels worldwide, and has offered the America beer maker $70 per share, up from the original offer of $65. A decision could come as soon as Monday.

Anheuser could suffer political backlash if they decide to join, causing supporters of the independent company to protest. Shares of InBev were up more than 2% after the New York Times reported the companies were in negotiation.

ETFs that might be raising a glass to the union: 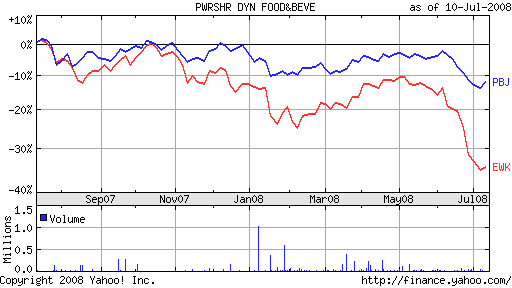