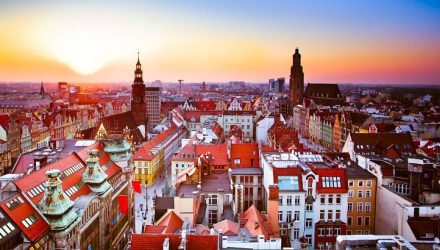 Those are impressive gains in less than seven months of action, but the long-term outlook for the emerging Europe powerhouse looks appealing. Supporting the momentum in the Polish markets, Poland’s economy grew at an annual rate of 4% for the first three months of the year, compared to 2.5% for the previous quarter, and the drop in investment that weighed on economic expansion through 2016 all but disappeared, reports Bartosz Chmielewski and Marcin Goettig for Reuters.

“The Polish economy continued to grow at an annual rate of nearly 4 percent in the second quarter, as suggested by the May retail sales and industrial output data. According to mBank analysts, fiscal-year growth will slightly exceed 4 percent, driven by public investments recovery and persistently strong consumption,” reports ETF Daily News.

EPOL, which turned seven years old in May, tracks the MSCI Poland IMI 25/50 and holds 38 Polish stocks. That ETF allocates over 63% of its combined weight to financial services and energy companies. Over 9% of the ETF’s weight is dedicated to consumer discretionary and consumer staples stocks.

PLND is nearly eight years old and holds 28 stocks. That ETF follows the MVIS Poland Index. Like its rival, PLND is heavily allocated to financial services and energy stocks with those two sectors combining for almost two-thirds of the ETF’s weight. However, PLND offers more leverage to the Polish consumer with consumer discretionary and staples combining for almost 16% of the ETF’s roster.