You are at:Home»Investing»Yields Rise as Dow Erases Early Losses 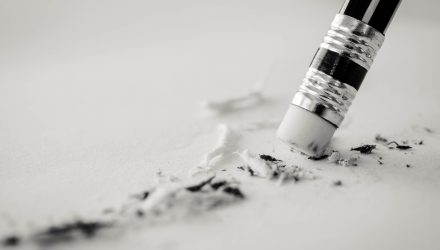 “It’s a bull market in stocks and it will continue until it ends, and no one knows when that will be,” said Bill Miller of Miller Value Partners. “It will end when either the economy turns down and earnings decline, or when interest rates rise to a level where bond yields provide significant competition for stocks.”

This week, investors may slowly be returning to the bond markets as flows into short- and long-term corporate bond ETFs were highlighted by an uptick in volume. ETFs like the Vanguard Short-Term Corporate Bond ETF (NASDAQ: VCSH) and the iShares Long-Term Corporate Bond ETF (NYSEArca: IGLB) saw an increase, according to Brian Gilman of ETF Sales & Trading at Virtu Financial.

“In fixed income, there was some bid back in a few corporates names on the upbeat sentiment as both VCSH (short term corporates) and IGLB (long term corporates) saw better buyers throughout the day and traded good volumes,” said Gilman.

VCSH tracks the performance of the Bloomberg Barclays U.S. 1-5 Year Corporate Bond Index–a market-weighted corporate bond index with a short-term dollar-weighted average maturity. In addition to VCSH allocating capital towards debt issues that are investment-grade, fixed-income investors will like the reduced exposure to duration with maturities between 1 and 5 years.

IGLB seeks to track the investment results of the ICE BofAML 10+ Year US Corporate Index, which  measures the performance of U.S. dollar-denominated investment-grade corporate bonds that have a remaining maturity of greater than or equal to ten years.

“It’s independent so I don’t speak to him, but I’m not happy with what he’s doing, because it’s going too fast,” said President Trump.