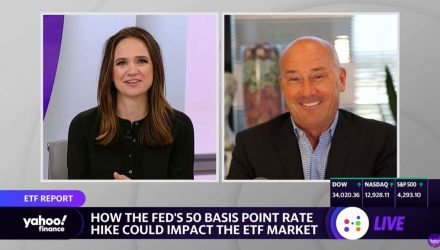 The news of the Fed raising interest rates by 50 basis points came out today, with no plans to raise it by 75. To discuss what that means in terms of ETFs, ETF Trends’ CEO, Tom Lydon, appeared on Yahoo Finance during the “ETF Report” to cover these bases and more.

Looking at the markets from a broad standpoint, investors were seemingly encouraged by what they had heard from the Fed Chairman. Lydon agrees that things seem relatively optimistic. With that being said, the Fed does have a big task on its hands, and the number one concern remains inflation. These are hefty inflationary numbers coming out, and considering how inflation is measured today, it’s definitely concerning.

“More money has gone into commodity ETFs this year than we saw going to fixed-income ETFs,” Lydon adds. But the benchmarks like the S&P 500 have people concerned due to the heavy allocations into the FAANG stocks and others like Tesla and Microsoft, which have all been underperforming in the major market indexes.

As far as how the uncertainty is affecting some investors, Lydon notes that there’s over $6 trillion in money market funds, which is a record, and lots of money in short duration. That’s important because the agg in the fixed-income side is down 10% YTD, following a poor 2021. So, thinking about investors approaching retirement and that becomes dead money, with the dangerous area arriving if there’s an extended period of time in rising rates.

On the other hand, sizable moves are coming into commodities for the first time for all the right reasons. Some may say things are still in the early days of inflation, and this extended period could amount to around a 3-5% allocation. Historically, with commodities, that’s a really good period. As a result, many advisors are raising the allocation to 10-15% for their clients.

.@ETFtrends CEO @TomLydon on how the Fed’s latest rate hike may impact ETFs: “More money has gone into commodity ETFs this year than we saw going to fixed-income ETFs.” pic.twitter.com/seGrw7ngWO

Looking at a reliance on thematic strategies as a possible alternative, Lydon explains how the effectiveness depends on where investors are moving to. Some themes, such as traditional growth or innovative, disruptive technologies, have hit some setbacks. However, the valuations show the inexpensive nature of these sectors.

“If you’ve got a long-term outlook, being able to buy Cathie Wood ETFs for 50-60% off, and you’ve got a 10-year horizon – pretty big opportunity there for sure,” Lydon adds.

Money is also going into options overlay strategies. There may be underlying indexes with options that can kick off 5-7% income when income is challenged in traditional fixed-income strategies. Money is moved from an income side of the balance sheet to the equity side, where people are still invested but also get an income kicker that benefits many.

As far as what advisors are saying about crypto’s current role with ETFs, there’s a lot of work being put in to find safe ways to get an allocation. There are some futures strategies and some separate account strategies as well. “Eventually, we’re going to have to see the SEC chair turn the card and allow investors to go into this area,” Lydon adds.

With these futures strategies that have been approved and are available now through 40 Act ETFs, it’s the closest that’s been reached to allowing advisors and individual investors to buy that in their brokerage accounts.

One final big question is the possibility of a recession. Lydon knows it’s important to fight inflation, but many investors feel the Fed is too late and not aggressive enough. If that results in recessions, that’s what happens. However, many are more fearful of the after-effects of inflation and what that could do.

“The Fed’s in a tough situation, and investors and advisors are very much concerned as well,” Lydon notes, adding how many in the U.S. are in good shape, though people overseas are not so lucky. “It’s going to be a long-term battle.”