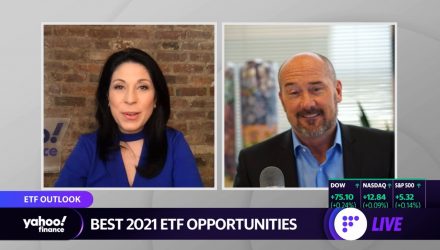 Joining the “ETF Report” with host Alexis Christoforous on Yahoo Finance, ETF Trends’ CEO, Tom Lydon, was on hand to talk all about the latest numbers for high performing ETF flows, the strength in emerging markets, in addition to some thoughts on a potential bitcoin ETF.

As far as 2021’s ETF performances so far, nothing has slowed down, according to Lydon. Six weeks in, there is already $90 billion in new flows, following a record $500 billion in 2020. And the money is going into popular themes, such as technology (EV, cybersecurity, etc.). It’s a movement away from traditional indexing.
There’s also strength overseas, as the dollar continues not to look as strong. That means local currencies help give areas in developed nations a boost, especially in emerging markets.

Looking closer at EM, Lydon points out China and the iShares MSCI China Fund (MCHI), which is up 17% YTD, showing it’s clearly part of the emerging market boom. Keeping an eye on financial technology, there’s the ARK Fintech Innovation ETF (ARKF), which is up over 20% YTD.
Another fund to focus on that’s both concentrated on EM and focused in China is the Emerging Markets Internet & Ecommerce ETF (EMQQ), which has a heavy allocation focused on companies such as Tencent, Alibaba, and Pinduoduo (an agricultural platform).
One more fund – the O’Shares Global Internet Giants ETF (OGIG), which is stocked with FAANG companies, making it a clear winner for small business owners with a need to work from home thanks to the embrace of technology.
When asked about a potential bitcoin ETF, Lydon is convinced things are looking up for it actually to happen sooner rather than later. It’s still speculation, but Lydon is aware the SEC is becoming more comfortable with bitcoin thanks to the adoption of the cryptocurrency by many companies.
“I think it’s coming, and the demand for bitcoin isn’t slowing down,” Lydon states.