You are at:Home»Expert Insights»Yahoo Finance: ETFs To Watch As Biden Prepares To Present Stimulus Plan 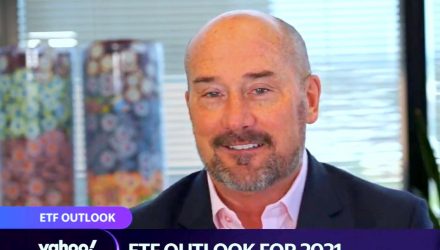 While 2020 was a record year of inflows for ETFs, a couple of weeks into the new year, there are other things to expect due to those increased flows. ETFs Trends CEO, Tom Lydon, joined host Alexis Christoforous on Yahoo Finance’s “ETF Report,” where he focused on potential fiscal/monetary stimulus policies, Covid-19 vaccine bets, and hopes for more stimulus checks.

As Lydon explains, it does not look like the flows will be slowing down any time soon. It’s also notable that certain areas are getting more love as the new administration begins to take its place. As far as opportunities in that regard, there is the stimulus plan announcement set to be explained on Thursday, which could have some significant effect on ETFs.

“We know he’s very hot on clean energy… along with infrastructure,” @ETFtrends CEO @TomLydon says on ETFs to watch under the Biden administration. “All the solar ETFs doubled in assets from $9 [billion]to $18 billion in 2020, and I think there’s a lot more to run there.” pic.twitter.com/FzyfHgxInT

Some ETFs to consider include the Invesco Solar ETF (TAN), which has been up 257% in the past year, doubling in assets as well. There’s also the FlexShares STOXX Global Broad Infrastructure Index (NFRA), up 1% over the past year. With a global infrastructure fund focusing on global energy, communication, transportation stocks, and a proposed plan from Biden, there are many good areas for NFRA to cover.

Lydon also notes how small caps have underperformed large and mega caps, so it’s worth looking at the iShares Factors US Small Cap Value (SVAL). It’s a new fund, less than 3 months old, but attractive for the way it has arrived just as investor demand continues to grow for value-oriented strategies.

Lastly, Lydon points out how online investing worldwide is not slowing down, which is why the Emerging Markets Internet & Ecommerce ETF (EMQQ) has been doing very well. The fund includes access to EM companies related to online retailers and the quickly expanding e-commerce industry. There’s also the lifting of certain restrictions to Chinese companies, which will only benefit American investors.

As far as possible near-term dangers to the current bull market, Lydon does note a creeping up in interest rates. “All the money that has gone into bonds and bond ETFs – when the rates go up, the values of those bonds actually decline. So that’s something to consider, as people have been moving into bonds for the past 30 years, even though the rates have been declining because of the safety factor,” Lydon states.

He also points out inflation, in general, where there has been an effect on prices at the pump or supermarkets. Still, there are ways to hedge against this, such as commodity ETFs specific to things like grain and corn, which would hedge against food prices.

Lydon continues, “In the ETF space, there are plenty of choices, but one must understand what current trends are in place, and it’s not time to rest on any laurels, because while there is a lot of activity in 2020 and it may feel like there may not be a bunch of activity, they’re still likely to be more, heading into 2021.”