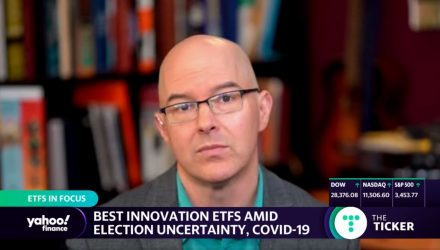 Yahoo Finance: Dave Nadig On Innovation As An Asset Class

As investors and advisors look to hone in on innovation, timely given Tesla’s strong earnings (TSLA), there are ways to look at ETFs through this lens. ETF Trends CIO and Director of Research, Dave Nadig, spoke with Yahoo Finance’s Akiko Fujita on “The ETF Report,” on measuring said innovation’s success and seeing it as an asset class.

Nadig notes how one of the big challenges is how to define innovation as an asset class. The catalyst for this is a few different things. A notable one is the ARK Innovation ETF (ARKK), which has made a name for itself by going strong on big names such as Tesla. It’s pulled in around $5.5 billion in assets this year and is up 134% over the last year. This has led to a whole spate of recent product launches with varying levels of investor interest.

As Nadig explains, “ARKK is notable because it’s an openly actively managed fund. I think we can all get how you get these analysts to chase these exciting young companies that are being disruptive. But, how you take data and build an index around that has been tricky. Still, people are attempting to accomplish this.”

Recent launches have added to this. They tend to look at specific industries that are right for transformation. For example, healthcare and telehealth, or online retailers make a lot of sense. At the same time, looking into areas like R&D development and patents can also prove to factor in the same way.

Highlight: Innovation ETFs are “looking for specific corners of the economy that are in the midst of enormous change and disruption,” @ETFtrends CIO & Director of Research @DaveNadig says. “That’s why these companies are exciting, but… they can be very, very risky.” pic.twitter.com/9Xh7qwVT1R

When questioned about the nature of volatility’s role when investing in these ETFs focusing around these sectors, Nadig explains it is very much a factor. These kinds of funds are looking for specific corners of the economy in the midst of enormous change and disruption.

He continues, “The reason we are focusing on it right now, obviously, is the many complex and relevant events that are making those changes happen even faster. This, in turn, creates what people have been calling the K-shaped recovery, where there’s a batch of big winners and big losers. But, when you’re going to participate in a part of the economy that’s being blown up — there’s going to be good and bad days. That’s why these companies are exciting, but it’s also why hey can be very risky.”

There have been many different approaches, which include leaning on the QQQs. Invesco just launched the QQQM and QQQJ ETFs as part of their innovation suite.  M is a mini version of the Qs — cheaper to own, might be more expensive to trade as an institution, etc.  The J is more interesting because it’s the “Next 100” beneath the Nasdaq 100.  The 100 has always had a sort of controversial reputation as an accidental growth index (and it’s up 35% this year and has pulled in $17 billion in new money), and the J fund is trying to build on that, grabbing the next 100 down the capitalization spectrum.  It’s pulled in $80 million in a week and has basically had creations every single day since it launched.

As far as looking at the differences between active and passive, Nadig notes how it is an attractive time to lean towards active. Things are volatile and moving quickly, which should be giving active the edge. The rest of the year is too uncertain to be clear for investors, so active managers seemingly have the edge in this current market scenario.

“We’ve seen many launches in the ETF space for active,” Nadig adds. “Folks like T. Rowe Price have been showing up. American Century as well. These are companies with traditional active management, and there has been some interest from investors. However, there isn’t a lot of evidence that, as a group, all these active managers are going to outperform. That said, I get the desire to try something different here.”