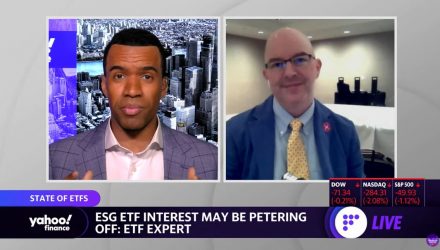 On this week’s “ETF Report” hosted on Yahoo Finance, Dave Nadig, Financial Futurist for ETF Trends and ETF Database, appeared live from ETF Exchange, the world’s largest ETF conference, held in Miami Beach, FL, to discuss how advisors are leveraging ETFs in an environment of inflation and rising rates.

Nadig explains that the dominant concerns for advisors at ETF Exchange were about repeatedly around rising rates and inflation, with advisors searching for ways alternative ways to invest in the changing economic and market environment.

Investing in the first quarter saw heavy flows into commodities for the first time in years as advisors and investors initially sought the space to hedge against rising inflation. Now, however, Nadig is seeing a branching out into other funds and approaches as inflation continues to climb.

“I highlighted one that I think was a great recent approach to this, and that’s the AXS Astoria Inflation Sensitive ETF (PPI),” Nadig says. “This is a combo platter of inflation fighters; it’s got a little bit of commodities, it’s got a little bit of TIPS, but it’s also got cyclical equities, and I think that’s an interesting way that a lot of investors and advisors are trying to play.”

Investing in PPI takes the guesswork out of finding the optimal inflation hedge instead of bundling several different methods together in one wrapper. The fund has seen inflows of $50 million in the last 50 trading days, a solid initial run, Nadig explains.

Traditional hedges such as gold have seen inflows and interest as well, but Nadig believes that advisors and investors are looking for more now than a simple inflation hedge.

“People are really looking for something that will give you that economic response to inflation, not just sort of that traditional hedge,” Nadig says.

“I don’t think we’re going to see that in this calendar year,” Nadig says. “There’s a bit of a horserace going on among ETF pundits, and I would say the current best guess is maybe sometime mid-next year, but the current insight we’re getting from the regulators is not positive.”

Touching on ESG funds, Nadig explains that ETF Trends and ETF Database saw a lot of advisor interest in ESG funds in 2021, with the launch of products such as the Engine No. 1 Transform 500 ETF (VOTE) that focuses on corporate governance and utilizing shareholder votes to drive change at the board level. However, that burst of interest has fallen off in the last six months, with fund flows reflecting that, according to Nadig.

“I think we’re at the beginning of a fragmentation of the ESG market where folks who have really strong opinions have some great products to choose from, but otherwise they’re looking to sort of the broader products,” Nadig says.

Broader funds include those like the Xtrackers S&P 5009 ESG ETF (SNPE), which offers exposure to the S&P 500 with what Nadig describes as a slight skew to ESG. This type of allocation to ESG may be what to expect going forward from advisors, particularly given the lack of any definitive ESG regulation.

“When you look at the regulatory environment, I think ESG will continue to be a part of the conversation but may not be the driver of flows,” Nadig explains.