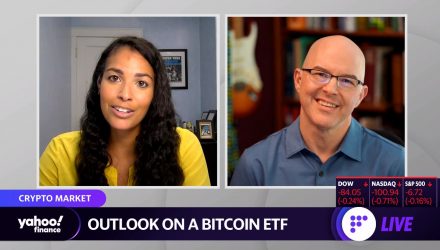 Cryptocurrency continues to be a popular point of discussion in the ETF world. Joining the “ETF Report” with hosts Alexis Christoforous and Kristin Myerson Yahoo Finance, ETF Trends’ CIO and Director of Research, Dave Nadig, discusses what investors are doing as they wait to be more involved in such a popular space that still has no official ETFs.

For Nadig, it’s all about waiting for the SEC to approve one of the nine filings currently out there for cryptocurrency, primarily Bitcoin. Notably, the SEC published an agenda for the rest of the year, which did not include cryptocurrency. Some may see this as a sign, but Nadig doesn’t necessarily find that to be the case, as some guidance for the SEC could come along to move things in a different direction in the coming months.

“I still suspect we’ll see an approval by the end of the year,” Nadig says in regards to the much-discussed Bitcoin ETF.

As far as finding exposure to the space, despite the lack of an ETF, for clients, as Nadig notes, there are two options for those wanting to stick with the exchange-traded side of things. The “pink-sheet trusts” are subject to big premiums and discounts as people trade them, which can be difficult.

Using a “picks and shovels” approach can also work well, as there are a lot of new funds and filings, including the Amplified Blockchain ETF (BLOK). Funds like this provide funds related to the industry and firms that put Bitcoin on their balance sheet without direct Bitcoin exposure.

Shifting gears over to inflation, as far as how investors should create an inflation hedge, Nadig points out the traditional way of doing this: relying on inflation-protected bonds. He also notes the commodities market, as the yields are in the bond market to make it interesting enough. On the other hand, Commodities have seen great flows into ETFs such as the Invesco Optimum Yield Diversified Commodity Strategy No K-1 ETF (PDBC).

In the commodities field, “You’re betting on that the price of oil, agriculture, and industrial metals are going to be the things that are still in short supply as we’re coming out of the pandemic. So those are the places I’d look,” states Nadig.

Commodities are frequently a good bet. But, on the other hand, Gold hasn’t been holding its own as of late, at least in the short term. So it’s really all about broad-based commodities, as far as advisors are concerned.

Some bigger news has come from Dimensional Fund Advisors, as four mutual funds have been converted to mutual funds this week. The four funds come in with a huge $29 billion in AUM, and they keep their track records (Back to 2007).

The funds themselves are fairly simple-looking index-like equity. They’re generally low-cost, tax-managed, well run, technically active because they manage low turnover and taxes. The ETF should only make this better, as anyone can buy these products right out of the gate.

As far as the broader impact, Nadig believes there could be some interest from other firms to act similarly. 401K plans that feature mutual funds make this difficult for some companies, as ETFs trade differently. Notably, it’s because Dimensional’s mutual funds were tax-managed, it allowed them to be more easily set up for the conversion.

It really will come down to the big name brand funds, as far as converting in the future, as they won’t be able to convert the 401K parts of those funds. So instead, there will likely be clone funds continuing to be launched by firms such as American Century or Fidelity.