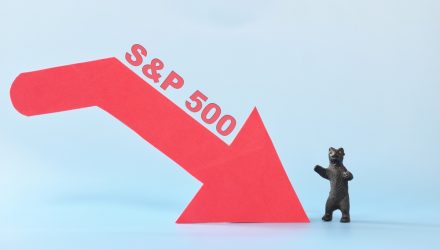 After a terrible April, the equity markets may still have more pain ahead. If an investor is still worried about further pullbacks, one might consider bearish or short exchange traded fund strategies to hedge further market risks.

“We think the S&P 500 has minimum downside to 3800 in the near term and possibly as low as 3460,” Morgan Stanley’s chief U.S. equity strategist Michael Wilson, one of Wall Street’s more vocal bears, tells Bloomberg.

According to Wilson, U.S. markets can still decline by between 8% and 16% from current levels due to higher costs and increased recession risks.

“Anyone who tells you we are in a bull market has got a lot of explaining to do,” Wilson says in a research note, adding that the “S&P 500 real earnings yield is the most negative since the 1950s.”

Wilson is among the most bearish Wall Street observers, with the lowest year-end target for the S&P 500 out of all equity strategists surveyed by Bloomberg News. While he doesn’t exclude a brief rebound off the protracted selloff in 2022, the strategist argues for investors to sell on the bounce.

“On the positive side, the market is currently so oversold, any good news could lead to a vicious bear market rally,” Wilson adds in the note. “We can’t rule anything out in the short term but we want to make it clear this bear market is far from completed, in our view.”