You are at:Home»Alternative ETFs»‘Wolf of Wall Street’ Serves Warning to Bitcoin Investors 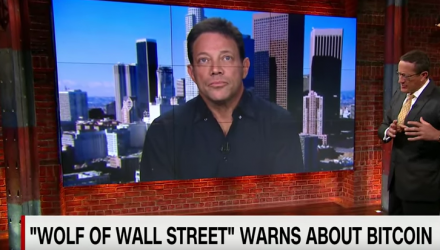 It takes a scammer to know a scam and Jordan Belfort, former stockbroker turned motivational speaker whose life was famously depicted in the 2013 film “Wolf of Wall Street,” warns investors to be leery of Bitcoin.

Belfort is all too familiar with investment hype machines after he defrauded investors via his stock brokerage Stratton Oakmont, which functioned as a boiler room to pitch penny stocks as part of a “pump and dump” scheme. In 1996, the National Association of Securities Dealers expelled Stratton Oakmont and Belfort was indicted of securities fraud as well as money laundering in 1999.

After serving a prison sentence, Belfort has penned two books and serves as a motivational speaker for topics, such as sales skills and entrepreneurship.

“I was a scammer. I had it down to science, and it’s exactly what’s happening with bitcoin,” Belfort told CNBC in a documentary. “The whole thing is so stupid, these kids have gotten themselves so brainwashed.”