You are at:Home»New ETFs»Will the MAGA ETF Make Your Portfolio Great? 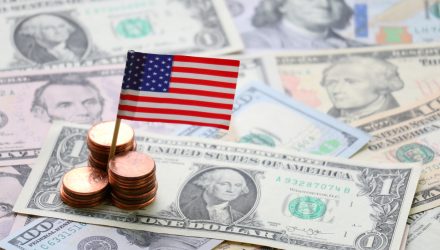 Will the MAGA ETF Make Your Portfolio Great?

It seemed like just a matter of time before an ETF such as this hit the marketplace. There are ETFs that allow you to invest in drone technology, whiskey producers, video games and Catholic values. So it shouldn’t be surprising that you can now invest based on political views. The Point Bridge GOP Stock Tracker ETF (BATS: MAGA) launched in September with the goal of investing in companies that, according to the fund’s prospectus, are “highly supportive of Republican candidates for election to the United States Congress, the Vice Presidency, or the Presidency.”

The fund starts with the S&P 500 companies as its initial universe. From there, it’s screened using publicly available electoral campaign contribution data to identify those companies who have made the largest aggregate reported political contributions across the past two election cycles. The 150 companies ranked highest by the total net dollars contributed and the net percentage of dollars given by a company’s employees and/or PACs to Republican candidates and committees versus Democratic candidates and committees are included in the index.

I can see why a fund such as this would be brought to market. In a time when the nation is highly polarized and increasingly vocal with their political views, it makes sense that people would want to invest in companies whose corporate political support aligns with their own. The question is whether or not this strategy ultimately has the ability to deliver higher returns.

On the surface, the answer would appear to be “not consistently”. There is a minor case to be made that says if the campaigns that these companies are contributing to are successful, electees could enact legislation that would be favorable to their businesses. As an example, a company like US Steel (NYSE:X) may wish to make political contributions to President Trump’s campaign since he wants to build a wall along the US-Mexico border, a project that could boost the company’s bottom line if it were to be contracted for part of the job. But that seems like a fairly weak link between political contributions and any tangible benefit that a company could experience as a result of them.

My greatest concern with this ETF is that the companies that qualify for the fund are not being selected on any qualitative or quantitative factors, just whether or not they’ve made contributions to the Republican Party. That strategy, though, does make MAGA look a lot different from the S&P 500. The biggest deviation is its allocation to tech. The S&P has a 23% to technology stocks. The MAGA ETF? Only 1%. Industrials has the heaviest weighting in MAGA with 22% of assets compared to just a 10% weight in the S&P 500. Most sectors in the ETF, in fact, have at least a 5% difference in weighting compared to the S&P 500.

Is MAGA worth adding to your portfolio? At this point, probably not. Shares are likely to be thinly traded for the near future which could make buying and selling the fund rather expensive. Its 0.72% expense ratio is well above what you’d pay for a typical large-cap index fund and won’t help its ability to outperform the S&P 500.The biggest problem I see is that the fund’s selection criteria is based on a factor that isn’t meaningful. There’s no thought given to company fundamentals, valuation or earnings.

In that sense, it’s almost like picking stocks at random. Investors with a particular political allegiance might fund this fund appealing, but, at this point, there’s little to suggest that this fund will be a long-term outperformer.