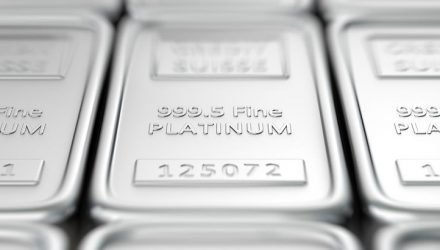 Why The Platinum ETF is Surging

Fresh U.S. sanctions against Russia are having a positive impact in at least one part of the financial markets. Platinum prices are rising because Russia is the second-largest producer of the metal behind South Africa.

The ETFS Physical Platinum Shares (NYSEArca: PPLT), the largest exchange traded fund listed in the U.S. backed by physical holdings of platinum, is up 3.2% over the past week and 6% over the past month, moves that account for significant chunks of PPLT’s 6.9% year-to-date gain.

The latest U.S. economic sanctions against Russia are playing a part in the recent platinum surge.