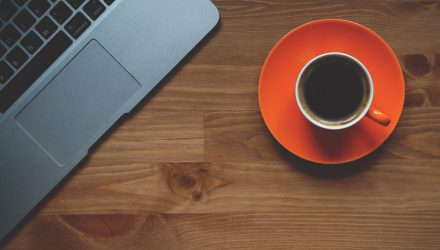 Why Tech ETFs Could Take a Break

After ranking as last year’s best-performing sector, technology and tech ETFs are off to another impressive start in 2018. Just look at the PowerShares QQQ (NasdaqGM: QQQ), which tracks the tech-heavy Nasdaq-100 Index. QQQ, one of the largest exchange traded funds in the U.S., is up 8% in January.

However, with technology’s ascent and that of QQQ, come concerns that the Nasdaq-100 is too heavily exposed to a small number of stocks. Additionally, some analysts opine that the benchmark’s significant technology overweight leaves it vulnerable should tech stocks fall out of favor. Due to tech’s ascent this year, QQQ’s exposure to the sector has increased while its consumer discretionary weight has been mostly steady.

Some technical analysts are expressing concerns about QQQ’s charts.

“The QQQ recently ended 5% above its 50-day simple moving average. This technical “alarm bell” has been rung just 20 times since the March 2009 stock market bottom, going off exactly twice a year since 2010,” said Schaeffer’s Investment Research. “The last time the exchange-traded fund (ETF) was 5% above its 50-day was June 2, 2017 – exactly one week before a massive tech sell-off and series of ‘buying climaxes’ for Nasdaq-100 Index (NDX) (upon which QQQ is based) components. One month after the June signal, QQQ was down 5.07%.”

Semiconductor ETFs have recently been durable performers as semiconductor stocks are rebounding to steady the broader technology sector, but that does not mean the gains are over for this suddenly hot group. However, valuations are rising for chip stocks.