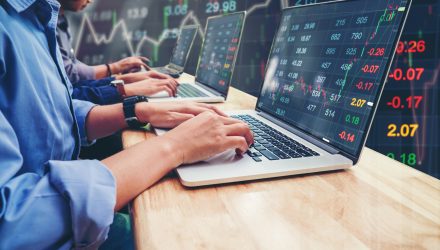 Why Revenue-Weighted ETFs Are a Good Fit Now

A revenue-weighted ETF approach could serve as a compelling alternative to market-cap weighting for core equity positions.

On the recent webcast, Anchor Your Core with Revenue Weighting, Brian Levitt, Senior Investment Strategist for OppenheimerFunds, pointed out that the current market cycle is getting older, with valuations expanding and the yield curve flattening. For example, during the previous market highs during the period 1997 through 1999, the average price-to-sales of the S&P 500 Index was at 1.83, whereas the market was showing a 1.94 price-to-sales during the 2015 through 2017 period.

Levitt warned that equity valuations are near all-time highs and well above historical averages. The S&P 500 currently trades at a 2.16 price-to-sales ratio, compared to an average 1.45.

As the markets push higher, Levitt also highlighted the fact that the market is becoming concentrated in its largest names. Momentum was a driving factor over 2017 as investors piled into a handful of outperforming company stocks. Consequently, the top 15 components in the S&P 500 has contributed to almost 50% of overall gains last year.

Due to the heightened concentration risks associated with traditional market capitalization-weighted indexing methodologies, passive investors may be exposed to potentially greater risks if a sudden turn affects some of these high-flying stocks that now make up greater weights in passive index funds. Alternatively, David Mazza, Head of ETF Investment Strategy, Beta Solutions at OppenheimerFunds, argued that investors may consider revenue weighting the market to provide attractive value exposure with growth potential.