You are at:Home»Alternative ETFs»Why Keep Gold ETFs on Your Radar 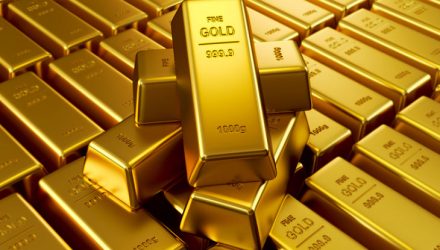 Why Keep Gold ETFs on Your Radar

While investment demand has increased in recent years, especially with the advent of easy-to-use gold ETFs, jewelry remains a driving factor in global demand at 54% of the average annual demand, compared to 30% for investment, 10% for technology and 6% from central banks.

Furthermore, the developing countries remain the largest source of physical demand at 70% of total world consumption, with China at 24% and India at 24% making up the top markets. Looking ahead, the World Gold Council anticipates the Indian economy to adapt to a so-called General Standard Tax and a better Monsoon season, which could add to stronger gold demand for the year. Additionally, the World Gold Council expects investment demand in the form of bars and coins to increase in China.

Many have also been concerned about the potential negative effects of rate hikes on gold prices as higher rates increase the opportunity cost of investing in gold. However, Artigas pointed out that gold returns have historically been positive on average when real rates are up to 4%.

“The reality is that rates are still quite low from a historical perspective worldwide. In addition, the market is pricing only a 50/50 chance of another rate hike by December,” Artigas said.

With higher rates ahead, though, some are still concerned of the traditionally inverse relationship between the U.S. dollar and gold.

Nevertheless, investors who are still interested in gold but are wary of the negative relationship with a stronger greenback may consider the SPDR Long Dollar Gold Trust (NYSEArca: GLDW, prospectus), which debuted earlier this year. The new gold ETF may help investors gain exposure to gold bullion price movements to hedge against potential market volatility, without worrying about the negative effects of a strengthening U.S. dollar.

“Just like GLD, GLDW is 100% backed by physical gold, and that is the only asset both ETFs hold,” Milling–Stanley said. “But as the name indicates, GLDW seeks to offer investors a long position in gold priced not in dollars, like GLD, but rather in as basket of six foreign currencies. These currencies are the euro, the yen, the pound, Canadian dollar, Swedish krona and the Swiss franc. The new ETF was designed to counter the potential for a strengthening dollar to have an adverse impact on the performance of gold priced in dollars.”

Financial advisors who are interested in learning more about the gold market can watch the July 25 webcast on demand here.