You are at:Home»Equity ETFs»Whiskey ETF a Top Performer as Anniversary Approaches 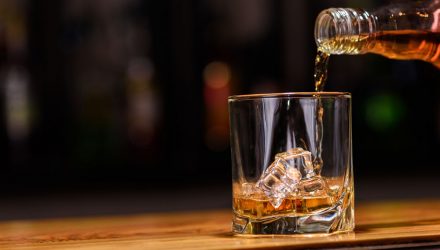 The Spirited Funds/ETFMG Whiskey and Spirits ETF (NYSEARCA: WSKY) is approaching its first anniversary on Oct. 12. In terms of performance, it has been an impressive start for this highly focused exchange traded fund as highlighted by a year-to-date gain of over 25%.

WSKY tries to reflect the performance of the Spirited Funds/ETFMG Whiskey & Spirits Index, which is comprised of companies that are whiskey and/or spirit distilleries, breweries, and vintners and related luxury goods companies engaged in the sale of whiskey or the production and sale of mixers for use with premium spirits.

The U.S. is a major exporter of American whiskey with the spirit being popular in major ex-US markets, such as Australia, Germany and the U.K. Popular brands both here and abroad include Jack Daniels, Jim Beam, Crown Royal and Jameson.

WSKY reflects the global nature of the whiskey business as the ETF features exposure to 13 countries, including both developed and emerging markets. The U.K., France and the U.S. combine for about two-thirds of the ETF’s geographic exposure.