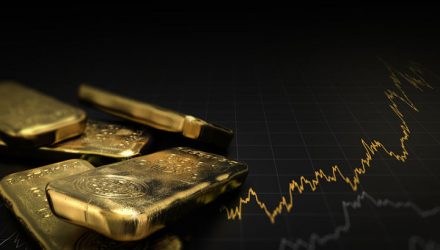 Investment demand for gold and related exchange traded funds have slowed this year, but gold bullion still remains a shining opportunity for investors, especially outside the U.S.

The SPDR Gold Shares (NYSEArca: GLD) saw $2.4 billion in net outflows over the past month, and overall gold ETF inflows slowed dramatically over the first half from last year’s record pace, according to the World Gold Council.

While investment demand for gold-related ETFs has diminished in 2017, holdings continue to grow, adding 56 metric tons in the second quarter, which brought total inflows over the first half of the year to 168 metric tons, with most of the increase coming out of European ETFs as holdings reached a record 978 metric tons. The heightened demand out of Europe may be associated with a spike in political risk amidst a year of contentious elections on a wave of rising populism and the ongoing Brexit negotiations.

“Demand for H1 2017 was down 14% compared to last year, but in some respects the market was in better shape. Last year’s growth was solely down to record ETF inflows, while consumer demand slumped. So far this year we have seen steady ETF inflows in Europe and the US, jewelry demand has recovered with good growth in India, while retail investment and technology demand is up too,” Alistair Hewitt, Head of Market Intelligence at the World Gold Council, said in a note. 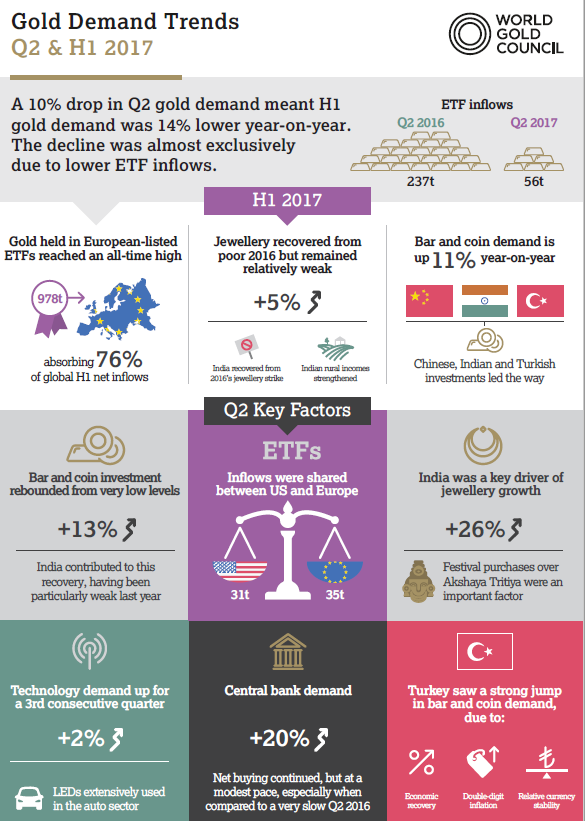 Juan Carlos Artigas, the Director of Investment Research at the Council and the main author of a new Wold Gold Council report released today, told ETF Trends that gold has outperformed key market indices and delivered returns comparable to those of the S&P 500 Index.

“While US stocks, especially in the Technology sector, have received a lot of attention as they continue to break record highs, the investors that we regularly speak point out the relevance of gold as a source of returns, diversification and downside protection in an environment where some sectors of the US stock market appear overvalued,” Artigas said.

Artigas added Central bank demand was up 20% in Q2 relative to the same period last year.

“In particular, Turkey bought 21 tonnnes during the quarter, bringing its gold reserves – net of commercial bank holdings – to 137.1 tonnes,” he said. “We understand the decision to increase holdings was strategic, reflecting Turkey’s commitment to gold as a key reserve asset. As a whole we expect that central banks will purchase between 350 and 450 tonnes of gold throughout 2017 – this would represent at least a 100-tonne increase (or 37%) from last year’s levels.”