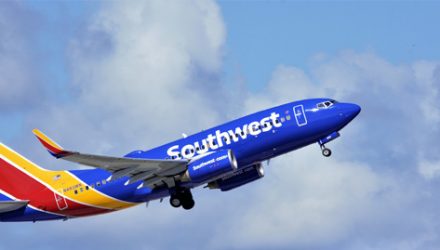 Wheels Up! Airlines and Travel Stocks Have Taken Off on Pent-Up Demand

As you may know by now, stocks just had their best August in more than 30 years. The S&P 500 Index gained 7 percent, the most for the eighth calendar month since 1986, around the same time that Gordon Gekko raided corporations in Oliver Stone’s Wall Street.

This is highly positive, as it means investors are betting that a possible vaccine for the coronavirus could be made available sooner rather than later. The head of the Food and Drug Administration (FDA), Stephen Hahn, said on Sunday he is willing to authorize a vaccine before Phase Three clinical trials were complete.

Tech stocks have been responsible for much of the market’s gains this year, but August saw a new crop of big gainers. Travel stocks—including airlines, cruise lines and hotels—were among the best performing equities during the month as new daily COVID-19 cases have declined in the U.S. from their mid-July highs. The NYSE Arca Airline Index rose an incredible 17.20 percent, its biggest one-month gain since January 2012.

Royal Caribbean was the top performer of the bunch at 41 percent, followed by MGM Resorts at 40 percent and Norwegian at 25 percent—all representing industries that have been hardest hit by the pandemic.

The five biggest airlines in the U.S.—Delta, Southwest, American, United and Alaska—saw double-digit growth in August, even as federal aid is soon to run out. However, President Donald Trump said recently that he supports additional assistance to protect airline workers. “We’ll be helping the airlines. You have to help the airlines,” Trump said from the White House Tuesday.

What that help might look like is unclear at the moment, but Trump’s chief of staff Mark Meadows claimed last week that Trump is considering an executive order to bypass Congressional lawmakers, which have still not agreed on a second major coronavirus relief package.

2021 Is Going to Be All About Travel: Analyst

We’re already seeing some of that pent-up travel demand being acted upon.

The number of people flying commercial in the U.S. has continued to recover from the mid-April lows, with more than 807,000 passengers screened by the Transportation Security Administration (TSA) on Sunday, August 30.

That’s not only a 36.5 percent increase in volume from the previous day, but it’s also well above the 50-day moving average. I believe a return to the post-pandemic high of 863,000 could spur a second big wave of airline equity buying, making now a potentially opportune time to consider getting exposure.

What’s more, carriers are either extending or putting in place new policies to restore confidence in air travel and lure passengers back to the skies. Delta announced that it would keep the middle seat empty until at least January 2021, while United said on Sunday that it would no longer charge travelers for changing their domestic flights.

United’s decision to scrap the $200 fee has spurred other carriers to follow suit, with American, Delta and Alaska all announcing similar policies in the days since. Southwest has never charged a change fee.

German investment bank Berenberg upgraded Southwest this week from hold to buy, citing the company’s attractive share of domestic revenue. What’s more, Southwest has had to cut less capacity than its competitors.

Although not directly related to travel, but a sign that the broader economy is quickly recovering, manufacturing in the U.S. expanded at a rapid rate in August. The ISM Manufacturing PMI registered 56.0, the fastest pace since late 2018. New orders have been a real driver of economic activity as overseas markets have gradually opened back up.

I’ll be posting a new video this week on the improved PMI. To get notified the moment it’s posted, make sure you’re subscribed to our YouTube channel by clicking here!

The S&P 500 is widely regarded as the best single gauge of large-cap U.S. equities and serves as the foundation for a wide range of investment products. The index includes 500 leading companies and captures approximately 80% coverage of available market capitalization. The NYSE Arca Airline Index is an equal-dollar weighted index of the most highly capitalized companies in the airline industry.

Holdings may change daily. Holdings are reported as of the most recent quarter-end. The following securities mentioned in the article were held by one or more accounts managed by U.S. Global Investors as of 6/30/2020: Alaska Air Group Inc., United Airlines Holdings Inc., American Airlines Group Inc., Southwest Airlines Co., Delta Air Lines Inc.