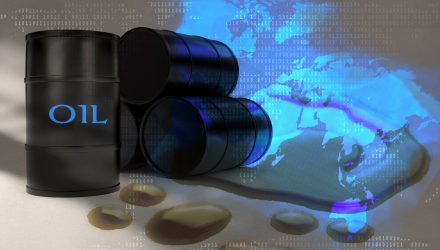 The United States Oil Fund (NYSEArca: USO), which tracks West Texas Intermediate crude oil futures, is up 12% in the fourth quarter, helping the benchmark oil exchange traded product end 2017 on an upbeat note after sagging for most of the year.

While the Organization of Petroleum Exporting Countries have moved to cut production, expectations of continued U.S. shale production remain a deterring factor. Nevertheless, recent U.S. inventory drawdowns, which if sustained, could support the current price levels. With 2018 imminent, there are several factors for oil investors to consider.

“There is no doubt that U.S. shale output is continuing to rise, but there is quite a bit of uncertainty about the magnitude of growth,” reports OilPrice.com. “Expectations have fluctuated over the course of 2017. At the beginning of the year, outlets like the EIA and IEA had very bullish predictions for shale output, with the EIA expecting U.S. output to average 10 million barrels per day in 2018.”

Current OPEC compliance with production cut plans remains above their historical average, and it usually takes between two to three quarters for inventories to normalize after the cuts. While demand has yet to catch up to elevated supplies, rebounding economies in Europe and steady economic growth in the U.S. could prompt more upside for oil next year.

“The big question is the durability of high compliance throughout 2018. An oil market that rebalances too quickly could lead OPEC members to abandon their pledges if they become tempted by higher oil prices,” according to OilPrice.com. “Russia has signaled that it is anxious to abandon the deal as soon as inventories fall back to average levels. The flipside is also true – a steep drop in prices could lure members into cheating as they become desperate for more revenues. But that is all speculation. For now, compliance looks good.”