You are at:Home»Webcasts»America’s ‘Financial First Responders’ Examine the 2020 Election 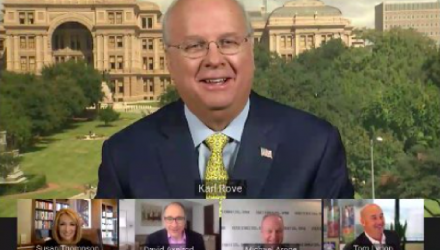 As financial advisors look to the next occupant of the White House, many are considering how to best position portfolios for the election outcome.

Rove started by covering Amy Coney Barrett’s nomination to the Supreme Court, which should be sent to the Senate floor in the coming days. With things already progressing to this point, Cory Booker even said last week “This Goose is cooked,” and America should already brace for a super majority oversensitive stance in the Supreme Court.

In response to this likely conservative majority on the bench, there are talks from the left that should Democrats take the upper hand in the upcoming elections, they need to expand the number of Supreme Court Justices to better even things out. Axelrod mentioned how former Vice President Biden’s victory is “baked in” and expects to let the American people know where he stands on his ideas on “packing the court” before the election.

Looking at election and swing state polling numbers, Biden has taken a lead in key battle grounds like Pennsylvania, Michigan and Wisconsin by 5% to 7%. Meanwhile, swing state polls severely undercounted Trump supporters in 2016, but now, Florida, Ohio, North Carolina, Arizona, Iowa are all within 3 points.

Along with Biden leading in the presidential race, the Democratic party is also taking a stab at a majority in both the House of Representatives and the Senate. Rove, though, pointed out that senatorial campaigns have raised more money than SPACs this year, and Republicans are fighting back with tooth and nail to maintain their majority at least in the Senate.

The new Covid-19 stimulus package has also been a political tool passed around during this election cycle. U.S. House of Representatives Speaker Nancy Pelosi hoped to resolve the “appropriations piece” of the aid bill later Wednesday. Additionally, Pelosi and Treasury Secretary Steven Mnuchin were scheduled to go over the details of the stimulus package later. While there has been a show of progress, traders are vacillating as impediments remain. For instance, Senate Majority Leader McConnell does not want a large coronavirus aid bill on the Senate floor before the election. The stimulus would go a long way to help the elevated unemployment rate that still hovers around 7.9%, and the numbers could still go up as Covid-19 case numbers tick higher during the seasonal cold winter flu season.

The presidential election may surprise America. While Vice President Biden enjoys a high single digit lead in the polls, Rove pointed out that we can’t believe polling numbers will perfectly predict results, especially with polls getting it wrong in the 2016 election. Voter turnout in 2016 was at a 20 year low with only 55% coming out to vote. Voter participation in this election could also surprise as voting by mail is running six times greater than at this point in the election four years ago.

The presidential election results will also have a profound impact on investors. For instance, the Federal Reserve under Chairman Jerome Powell has maintained a lower-for-longer interest rate environment, and the next president could decide who sits at the head of the central bank and if there is any policy changes coming. Biden has also proposed higher tax increases, notably on those making over $400,000, along with potential tax hikes on corporations that could weigh on mid- to long-term corporate America growth. Trump has also been critical of trade with China and other trading partners, but Biden could take a softer approach or an indirect approach to resolve these trade disputes. Antitrust claims on big tech names like Facebook, Amazon and Google could also muddy the waters.

Looking ahead, Arone highlighted a number of areas where there are the biggest differences should either Trump or Biden take the Oval Office. For starters, in health care, the Affordable Care Act or Obamacare will sit up front the Supreme Court on November 10. Trump has helped the traditional energy crude oil energy sector, but Biden has made a clear preference for a shift toward clean energy and infrastructure. Additionally, areas like trade, foreign policy, taxes and technology as mentioned before may also come to the forefront.