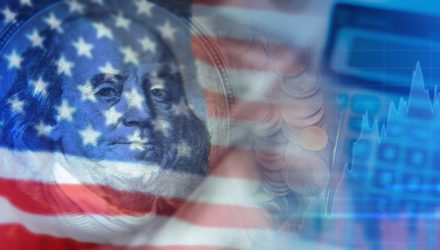 Well, At Least the U.S. Dollar ETFs Are Up This Year

U.S. dollar currency-related exchange traded funds have been among the few bright spots in a year marked by global turmoil.

The WSJ Dollar Index, which tracks the greenback against a basket of 16 currencies, also increased 8.7% over the first half of 2022, the Wall Street Journal reported, putting the benchmark on pace for its best first half since 2010 when it rose 8.8%.

Investors seeking refuge from wild market swings have turned to the dollar as a safe haven play, pushing the greenback to multi-decade highs.

“I’ve been hearing about investors losing money sitting in cash, and that cash is trash for as long as I’ve been in this industry,” Aronov told Bloomberg. “But the reality is that if you have been in cash for the last five years, you’ve essentially outperformed the Bloomberg Barclays aggregate index year to date, over one year, three years, and, depending on the day, yes, even five years.”

“The persistent strength of the dollar as a reflection of tighter monetary policy and a lower global risk tolerance makes you want to stay more cautious in risk-taking,” Rick Rieder, head of fixed income at BlackRock Inc., told the WSJ.

The dollar’s strength has been most pronounced against the Japanese yen currency as the Bank of Japan maintains its easy-money policy and commitment to ultra-low rates, putting it at odds with other global central banks, like the Fed, that are already hiking rates. The USD has surged almost 18% against the yen over the first half of 2022, marking its largest first-half percentage gain on record.