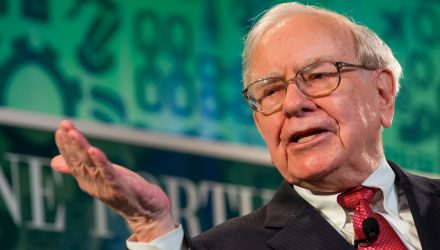 American business magnate and value investing guru Warren Buffett turned 88 today, reminding us in an interview with CNBC that the more things change, the more things stay the same–especially with respect to his distaste for bonds. Backed by the S&P 500 in the midst of the longest bull market recorded, the “Oracle of Omaha” was quick to heap praise on U.S. equities over debt issues.

“If you had your choice between buying and holding a 30-year bond for 30 years or a basket of American stocks, there’s no question you’re going to do better holding stocks,” said Buffett. “It’s considerably more attractive than fixed-income securities.”

“That doesn’t mean they’re going to go up or down tomorrow, next week or next year, but over time, a bunch of businesses that are earning high returns on capital are going to beat a bond that’s fixed at roughly 3% for 30 years,” he added.

In a simple year-to-date chart comparison between the iShares Core US Aggregate Bond ETF (NYSEArca: AGG) and the S&P 500, the two represent a dichotomy between the two asset classes. The AGG is down 2.5% as opposed to the 7.7% increase in the S&P 500.

It’s been well-documented that the Berkshire Hathaway CEO is a strong proponent of investing in equities rather than bonds, telling CNBC in a previous interview that he’d “choose equities in a minute.”