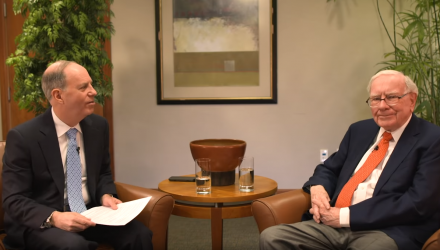 Speaking in an interview with Yahoo Finance, Berkshire Hathaway CEO Warren Buffett took the opportunity to delve into his thoughts on technology changing faster than people’s ability to understand it. Specifically, Buffett spoke about what problems could arise.

“I think cyber poses real risks in humanity forgetting about the problems, even misinformation,” Buffett states.

As an example, he points out the 22,000 miles of railroad tracks, and the trains carrying ammonia and chlorine. Buffett’s preference would be to have this sort of system exist in a non-cyber world, over a cyber one, where humans still have some level of control, in the case of a potentially disastrous event.

“The problem about something like cyber is that it’s moving and it’s just unpredictable.”

Buffett references events ranging from the anthrax attack to 9/11 in regards to the potential for specific tools to be used against the public. It’s not about technology being evil, but a lack of better responsibility in development.

Musk Has Room For Improvement

Turning the conversation towards another tech-focused subject, Buffett is asked about his opinions of Elon Musk’s behavior as a CEO.

“I think he has room for improvement,” Buffett jokes, “And he would say the same thing.”

As Buffett explains, it’s been a while since he’s talked with Musk, and even then, it was only once or twice. Musk joined The Giving Pledge, but that was seven or eight years ago, and Buffett hasn’t had any real contact.

Buffett does express a level of admiration for the man. He notes the simple truth that some people have a talent for ‘interesting’ quotes, while others have chosen to block the more potentially controversial thoughts that come to mind.

“He’s a remarkable guy, but I don’t see the necessity to communicate,” Buffett adds.

From Buffett’s perspective, he would instead put little of himself out there, rather than fuel speculation. Speaking of Twitter (NYSE: TWTR), Buffett talks about how he was signed up by a friend of his but has no idea how to use it. He’s never written a Tweet but has approved a couple over time. His world just isn’t caught up in that.