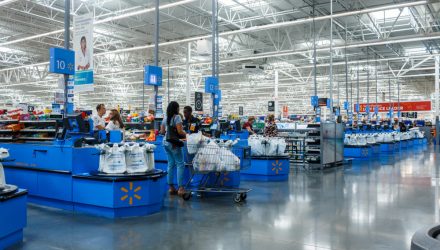 “Walmart basically pulled the plug, and most retailers are lower across the board,” Peter Cardillo, chief market economist at Spartan Capital Securities, told Reuters.

Walmart, a bellwether for the retail segment, warned that its full-year profit outlook could fall 11% to 13%, or much worse than its previously anticipated 1% dip.

“Bottomline results were unexpected and reflect the unusual environment. U.S. inflation levels, particularly in food and fuel, created more pressure on margin mix and operating costs than we expected. We’re adjusting and will balance the needs of our customers for value with the need to deliver profit growth for our future,” Doug McMillon president and CEO of Walmart, said in a note.

The multinational retailer warned that basic staples are taking up a greater portion of household budgets, so American consumers are left with less to spend on anything extra. Consequently, Walmart warned that it could implement steep discounts to dump its inventory, which would weigh on further profits.

“This is a sneak peek inside the challenges and the decision making that’s happening inside of the household,” Steph Wissink, a retail analyst for Jefferies, told CNBC.

“We appear to be firmly in a ‘discretionary goods recession,'” Wissink added.

Americans are beginning to see the effects of rising inflation costs on their wallets, with U.S. consumer confidence dipping to an almost one-and-a-half year low in July.

Burt Flickinger, managing director at Strategic Resource Group, cautioned that Walmart’s gloomier outlook is a warning sign for the broader consumer discretionary sector, or a “proverbial train wreck” for retailers, as many stores will find consumers with less money to throw around on discretionary goods, Reuters reported.