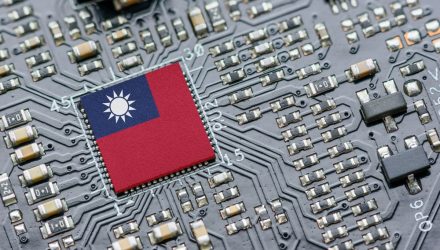 Semiconductor ETFs haven’t exactly had a year to write home about. They picked up a big boost this week, however, with news that Warren Buffet’s Berkshire Hathaway purchased a $4.1 billion piece of the Taiwan Semiconductor Manufacturing Company (TSM), which may benefit one of the Taiwan ETFs with the largest TSM exposures, the Franklin FTSE Taiwan ETF (FLTW).

FLTW holds TSM as its largest weight at 19%, more than double its next highest weighted holding at 5.7%. TSM is a key part of the overall high-end chip market, providing components like the main processors used in Apple’s (AAPL) iPhone and Qualcomm’s (QCOM) smartphone chips, among others.

Boosting TSM in an increasingly multilateral battle for microchip supremacy is news this week that Taiwan’s parliament is set to consider expanded tax breaks for tech companies Thursday via its own “CHIPS Act,” with TSM set to benefit from as much as a 30% tax reduction.

Risks of war to Taiwan’s people and companies seem to have lessened, as well, with U.S. President Joe Biden sharing that he does not believe there will be an “imminent” attempt by China to invade the island nation. Observers had previously been worried that a global community distracted by Russia’s war in Ukraine might have missed signs of an invasion in the South China Sea.

There are other indicators on the market that semiconductors, a key growth area for the modern high-tech economy, may be back on the menu for investors, with German chip shop Infineon Technologies AG (IFNNY) upping its financial targets Monday thanks to increased demand for semiconductors.

FLTW tracks the FTSE Taiwan RIC Capped Index and charges a modest 19 basis point fee for its exposures. Having launched back in 2017, it celebrated its five-year anniversary this month, returning 50.7% over that period. Its more recent returns have grown, up from -6.6% over three months to 18.6% over one month, beating the ETF Database Category Average by 7%.

While supply chain challenges and the tech sector’s tough 2022 still linger for semiconductors, a Taiwan ETF like FLTW may be poised to benefit from TSM’s recent positive news. Should semiconductors rebound well around the turn of the year, FLTW offers a notable exposure to the key tech sector.