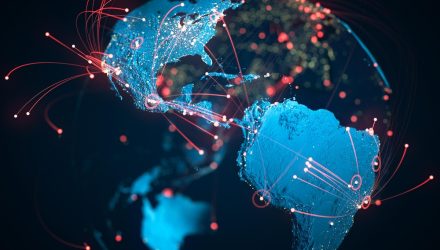 Believe it or not, broad benchmarks of emerging markets equities are outperforming the S&P 500 this year, but with the widely followed MSCI Emerging Markets Index down 17.63% year-to-date, it’s understandable that investors aren’t running to developing economies.

However, there are pockets of opportunities if investors know where to look. Fortunately, they don’t need to look far because Mexico, as represented by the Franklin FTSE Mexico ETF (NYSEArca: FLMX), looks appealing on a relative basis.

FLMX, which tracks the FTSE Mexico Capped Index, is sharply outperforming both the MSCI Emerging Markets Index and the S&P 500 this year. Adding to the allure of FLMX is that Mexican financial markets appear sanguine following President Andrés Manuel López Obrador’s Morena party winning four of six governor’s races earlier this month. AMLO is known for being in favor of state-controlled companies, but he’s also put forth some policies that markets favor, including collecting on old tax debts and lowering public workers’ salaries.

“But the 68-year-old president also has been surprisingly successful in combining popular social largess with a tight fiscal belt, a mixture he labels ‘republican austerity.’ Half of Mexico’s 130 million citizens have benefited from either cash transfers or minimum wage increases since AMLO took office in 2018,” reported Craig Mellow for Barron’s.

FLMX holds 37 stocks and is a potentially lower-volatility idea relative to other single-country exchange traded funds. The Franklin Templeton ETF allocates about 49% of its weight to consumer staples and communication services stocks, according to issuer data. In Mexico, the communication services sector isn’t as growth-heavy as the group is in the U.S., meaning it’s less volatile and more income-focused. Another sector that’s well-represented in FLMX is also appealing.

“With equities, investment fashion is shifting toward Mexico’s established blue chips with reliable profit streams and minimal risk of disruption. Mexican banks, in particular, have plenty of expansion headroom even without gross-domestic-product growth,” according to Barron’s.

Citing Malcolm Dorson, Latin American portfolio manager at Mirae Asset Global Investments, Barron’s reported that two-thirds of the population of Latin America’s second-largest economy are unbanked and just 5% have mortgages. For investors considering FLMX, those potential growth opportunities in the financial services space are relevant because that sector accounts for 18.38% of the fund’s roster.

Mexico lacks a startup scene comparable to those in the U.S. and other Latin American markets, but that works in favor of FLMX holdings such as Grupo Financiero Norte and Walmart de Mexico because those market leaders can carve out niches in fast-growing segments such as fintech and e-commerce.