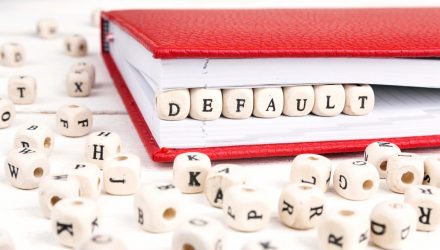 Making matters worse for junk bonds is increasing speculation regarding economic contraction. Some economists argue a recession is already setting in. Such sentiment can be a drag on exchange traded funds such as the Franklin Liberty High Yield Corporate ETF (FLHY) because conventional wisdom dictates that during recessions, issuer default rates increase.

Dealing with defaults is perhaps the biggest risk when investing in high yield bonds and one that underscores the importance of taking a broad approach with an ETF like FLHY. Recent default data aren’t alarming, indicating that the market’s treatment of FLHY this year may be too harsh.

“The U.S. high yield bond market experienced an increase in defaults for the second time in three months, lifting the year-to-date default rate to 0.6% from 0.4%,” said Fitch Ratings in May.

In May, there was just $3.3 billion in default volume, which was mostly attributable to one issuer filing for bankruptcy and another missing an interest payment. Those companies aren’t members of the FLHY portfolio, confirming the benefits of the fund’s status as an actively managed ETF.

“The 2022 default forecast remains at 1% despite the high level of macroeconomic uncertainty. The 1%-1.5% default forecast for 2023 is also unchanged due to good issuer liquidity and the positive impact high oil and gas prices is having on energy credits, which comprise the largest share of the market at 14%,” added Fitch.

Although the default outlook is manageable and not off-putting for many investors, those looking for an added layer of safety may want to consider FLHY over an index-based counterpart. The managers of the $260.2 million fund employ a deep, bottom-up, fundamental research process that can steer investors clear of likely defaulters while identifying compelling income and value opportunities.

“The high yield universe, at $1.42 trillion, has declined for seven consecutive months and is down 5% from its September 2021 peak. Fitch’s Market Concern Bonds total climbed to $136.2 billion from $130.9 billion, mostly due to additions in the less worrisome Other Market At-Risk Issuer list,” concluded Fitch.