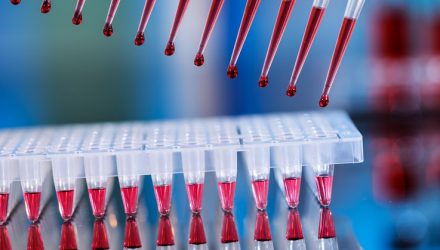 That’s despite a slump in biotech stocks dating back to early 2021 that is depressing share prices of potential targets. Still, hope for a rebound in consolidation activity in the space burns eternal, and some analysts are optimistic that the situation will turn for the better in the coming months.

A variety of exchange traded funds could benefit from that theme, including the Franklin Genomic Advancements ETF (HELX). Actively managed, HELX is nearly two and a half years old. More relevant than its age is a methodology that could be useful for investors looking for an avenue to participate in biotech consolidation or a way of tapping into a growth space that is now undervalued in the eyes of some analysts.

HELX “provides access to companies benefitting from or facilitating the use of new research including DNA sequencing, gene editing and personalized medicine and “uses bottom-up fundamental research conducted by dedicated, industry-specific analysts to identify disruptive business models at the right stage for investment,” according to Franklin Templeton.

Speaking of compelling valuations, in a recent note to clients, Wells Fargo analysts led by Mohit Bansal highlighted that issue as a potential catalyst for biotech mergers and acquisitions activity.

Additionally, some large-cap, blue-chip biotech and pharmaceuticals companies, including some HELX components, are flush with cash and need to replenish product pipelines, indicating that they could be interested buyers of smaller firms.

“Big BioPharma needs growth, and the 5 major US companies with the biggest need have $400B+ cash available from now to 2025, and revenue need of ˜$65B+,” according to the Wells Fargo analysts.

The bank mentioned Bristol Meyers (NYSE:BMY) — a HELX holding — as a potential suitor. While the Wells Fargo analysts didn’t highlight possible biotech targets by name, Vertex Pharmaceuticals (NASDAQ:VRTX) is often rumored to be a takeover candidate. That stock is also a HELX component.

Interestingly, a recession could be the impetus for more biotech consolidation.

“Past recessions have prompted other combinations in the sector like Pfizer’s acquisition of Wyeth, Merck’s tie-up with Schering-Plough and Roche’s purchase of Genentech, which all occurred in 2009,” reported Christina Cheddar Berk for CNBC, citing Wells Fargo.