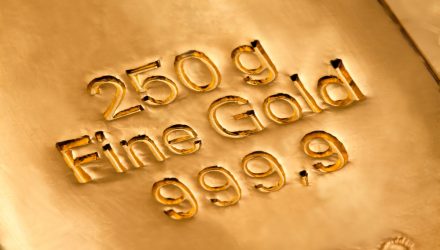 Gold investors are understandably frustrated. After all, inflation is high, but the yellow metal — historically a prime inflation-fighting asset — isn’t generating impressive returns.

In brighter news, gold’s year-to-date struggles could signal opportunity with exchange traded funds, including the Franklin Responsibly Sourced Gold ETF (NYSE Arca: FGLD). In fact, FGLD, which debuted last month, could prove to be a well-timed new ETF by virtue of the notion that there may be value in bullion following the aforementioned weakness.

Of course, all rallies need to start somewhere, and support for FGLD could be rooted in some stability by gold, which could eventually give way to legitimate upside. After a bumpy first half, some stability would be appreciated by gold bugs.

“But gold gave back some of those early gains as investors shifted their focus to monetary policy and higher bond yields,” according to the World Gold Council. “By mid-May, the gold price had stabilised in response to the tug of war between rising interest rates and a high-risk environment. The latter was a combination of persistently high inflation as well as likely support also from the extended conflict in Ukraine and its potential knock-off effects on global growth.”

Still, in what could be a positive sign for FGLD, flows to gold ETFs were positive (and strong) in the first half of the year, indicating asset allocators and other market participants are comfortable wagering on upside for the commodity.

“Our Gold Return Attribution Model (GRAM) corroborates this. Rising opportunity costs – both from higher rates and a stronger dollar – were key headwinds to gold’s performance y-t-d, while rising risks – from inflation as well as geopolitics – pushed gold higher for much of the period,” added the WGC.

Something else that could work in FGLD’s favor in the back half of this year is that while the strong dollar is hindering gold prices, that means other currencies are slumping, leading to higher bullion prices when measured in other currencies.

Additionally, gold wasn’t dreadful in the first half of 2022. It outperformed stocks and bonds, indicating that critics may be overstating just how bad, if at all, things are for the commodity.

“Further, at first glance, gold’s flat year-to-date performance may seem dull, but gold was nonetheless one of the best performing assets during H1. It not only delivered positive returns, but it did so with below average volatility,” concluded the WGC. “As such, gold has actively helped investors mitigate losses during this volatile period. Especially considering that both equities and bonds, which usually make up the largest portion of investors’ portfolios, posted negative returns during the period.”