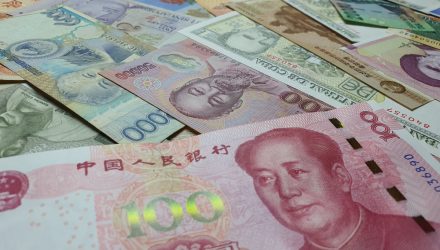 Chinese stocks and the related exchange traded funds plunged on Monday as it became apparent that President Xi Jinping — fresh off approval for an unprecedented third term — is consolidating power.

Market participants made their displeasure with Xi’s move known, pummeling Chinese equities across a variety of sectors, pinching ETFs such as the Franklin FTSE China ETF (FLCH) in the process. In other words, geopolitical risk remains a primary concern for investors mulling exposure to the world’s second-largest economy.

Still, some market observers maintain the view that China, despite what’s become a trying investment thesis, is offering some value and can reward risk-tolerant investors with long-term time horizons.

“Policy easing, while monetary policy in the rest of the world is tightening, has arrived. Although property market measures had perhaps disappointed expectations, action is now coming through thick and fast and our central macro research team has become more constructive recently,” according to a report issued by BNP Paribas earlier this month.

As the French bank noted — and this could be of relevance to FLCH investors — China appears to be taking its foot off the regulatory accelerator. That was arguably the primary issue weighing on assets such as FLCH last year, and it remains relevant today because the ETF, which follows the FTSE China Capped Index, allocates almost 41% of its total weight to the consumer discretionary and communication services sectors. Those were the groups most adversely affected by Beijing’s 2021 regulatory crackdown.

Another point perhaps working in favor of FLCH is that despite the various headwinds currently confounding Chinese financial markets, earnings expectations for companies based there are actually quite robust.

“Decent earnings expectations have remained in place, with earnings growth estimates at 9.5% for this year and 15.5% for next year. Earnings expectations for Chinese companies fell ahead of the rest of the world and are now inflecting higher much sooner, with meaningful caution built in to buy-side estimates,” added BNP Paribas.

Perhaps of little surprise to U.S. investors given the various controversies associated with China is the point that stocks there are inexpensive.

“Attractive valuations: after a torrid 2021, the MSCI China forward price/earnings ratio relative to the broad ACWI index had fallen to a six-year low in March. Valuations have recovered since as Chinese earnings momentum has been weaker, but reasonable – and investor positioning is still considerably underweight,” concluded BNP Paribas.

Speaking of good deals, FLCH charges just 0.19% per year, which is among the lowest expense ratios in the China ETF category.