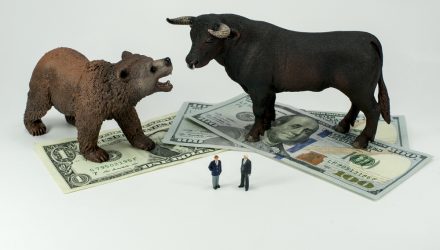 The CBOE Volatility Index and VIX-related exchange traded funds climbed on Monday as U.S. equities dipped into bear market territory and more began to warn of an economic recession.

The iPath Series B S&P 500 VIX Short Term Futures ETN (NYSEArca: VXX) increased 9.8% and the ProShares VIX Short-Term Futures ETF (NYSEArca: VIXY) advanced 11.0% on Monday. Meanwhile, the CBOE Volatility Index jumped 18.2% to around 32.8, with the futures curve inverting, or reflecting increased uncertainty in the short term than in the three months ahead.

Meanwhile, the S&P 500 retreated and was down more than 20% from its January 2022 highs. If the losses hold, the benchmark will officially enter a bear market for the first time since the COVID-19 pandemic first began.

“It’s going to get a little uglier,” Victoria Greene, chief investment officer at G Squared Private Wealth, told Bloomberg. “It’s going to be very hard for stocks to rally when the Fed continues to put hawkish pressure. There’s no way they can slam on the brakes with inflation without slamming on the brakes economically speaking. It’s funny we still have recession deniers.”

The selling pressure intensified on Monday after Friday’s data revealed that U.S. inflation accelerated more than expected to a four-decade high in May. The figures also fueled doubt that the Federal Reserve had a handle on curbing surging consumer prices, with many traders betting on an increasingly aggressive monetary policy outlook to control the fallout.

“The Fed said it has got inflation under control. The Fed doesn’t have it under control, and they could have lost control,” Ken Polcari, chief market strategist at SlateStone Wealth LLC, told Reuters.

“I don’t see panic selling yet, but it feels like it’s coming,” Polcari said, adding that a decline below 3,800 points in the S&P 500 index could push more to flee equities.

Market observers are now waiting on the Fed’s latest update on Wednesday, with many traders pricing in 175 basis points of tightening by September, which may even include a 75 basis point hike.

“What’s been missing the last several months is sort of what I would call a ‘cathartic flush out,’ where you get the VIX above 40, which is one of the things you need for at least a trading bottom,” Emanuel told Bloomberg.