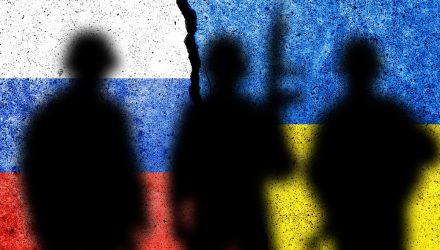 The CBOE Volatility Index and VIX-related exchange traded funds climbed on Thursday as traders dumped risk assets in response to growing concerns over a potentially imminent Russian invasion into Ukraine.

President Joe Biden argued that there was now every indication that Russia plans to invade Ukraine after Russia-backed rebels and Ukrainian forces exchanged fire in what Western officials warned was a possible pretext to invade, Reuters reports.

“The wall of worry is under full construction,” Terry Sandven, chief equity strategist at U.S. Bank Wealth Management, told Reuters. “You’ve got inflation that seems to be widespread, a Federal Reserve policy change looms on the horizon, and then there are ongoing tensions with Russia and Ukraine.”

“We’ve got to put more focus on what’s being done on the ground, rather than what’s being said,” Paul Jackson, global head of asset allocation research at Invesco, told the Wall Street Journal. “My presumption is that this will be sorted out diplomatically. If markets go down a lot more, then I would think it would be an opportunity to buy.”

Jackson argued that we shouldn’t expect a major change in the situation from Russia while its ally, China, continues to host the Winter Olympic games. However, the Games conclude this weekend, so “we still have a little while to go before we can feel things have really dissipated on a permanent basis. In the interim, it’s a propaganda game,” Jackson added.