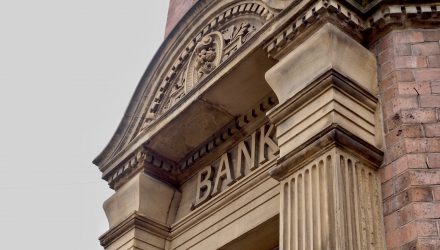 A Volatility Benefit of Bank ETFs

Investors should consider sector-specific ETFs to focus on targeted segments of the market, especially as U.S. markets head in to the late business cycle.

A flattening yield curve previously fueled outflows in the financial sector, but a stable yield curve and better-than-expected earnings growth helped reignite investment demand for the sector over April. Financials in particular appear attractive on an absolute and relative basis to the S&P 500.

“Bank stocks haven’t exactly been the market’s favorite over the past two years,” reports Evie Liu for Barron’s. Since the beginning of 2018, bank stocks in the S&P 500 have tumbled 9%, while the broader index has gained 6% during the same period. But Christopher Harvey at Wells Fargo sees multiple reasons to be optimistic about the industry.

“Since the financial crisis, banks have been subject to stricter regulations and passed eight stress tests by the Federal Reserve,” according to Barron’s. “They have improved their balance sheets, kept solid credit profiles, and limited risky mergers and acquisitions. The sector has been returning more capital to investors through dividends and buybacks, and that has helped keep share prices more stable, Harvey says.”

For investors, the good news is bank stocks’ fundamentals are improving, risks with the group are declining and valuations are low.

“Bank stocks are less risky now than they were years ago, but still trade at a very compressed valuation, Harvey says. The group is now priced at 10 times forward earnings, much lower than the S&P 500’s 16 times,” according to Barron’s.

Since the start of the second quarter, investors have added $1.08 billion to XLF, a total surpassed by just nine other ETFs.