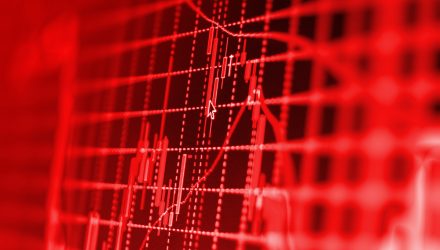 On Thursday, the iPath Series B S&P 500 VIX Short Term Futures ETN (NYSEArca: VXX) jumped 15.3% and the ProShares VIX Short-Term Futures ETF (NYSEArca: VIXY) advanced 15.0%, both breaking back above their short- and long-term resistances at the 50- and 200-day simple moving average, while the CBOE Volatility Index climbed 31.9% to 35.1, its highest level since June.

The VIX, the so-called gauge for market fear that typically rises during big stock selloffs, recently fell back during the continuous rallies, but it had remained stubbornly elevated above its long-term average of near 20 as stocks pushed back into record territory.

However, the VIX suddenly spiked Thursday in response to the broad market selling, with the S&P 500 Technology Sector down over 6% and was on pace for its first losing session in 11 trading days and its biggest one-day loss since March.

“Someone hit the ‘sell tech, buy dreck’ button and this is creating a bid beneath beleaguered groups, while [tech]gets pummeled,” Adam Crisafulli of Vital Knowledge, told CNBC. “For tech specifically, the stocks are seeing large percent declines, but this comes after a massive recent rally. Tech has been untethered from fundamentals for a while and momentum can work in both directions.”

The sudden precipitous fall off and spike in volatility comes after another record-setting session for the S&P 500 and the Nasdaq Composite on Wednesday.

Since late March, the S&P 500 surged over 55% and the Nasdaq rallied nearly 70%. Meanwhile, the Dow advanced more than 50%. After the record-setting run, some analysts warned that it may be time for the market to consolidate some of its recent gains.

“While we don’t expect a crash to happen again now, we don’t need new highs to grow every day to keep the uptrend alive either,” Frank Cappelleri, executive director at Instinet, said in a note. “With the [S&P 500] up 9/10 days and having just logged its biggest advance in two months, it’s certainly earned a period of which to digest.”