You are at:Home»Equity ETFs»Utilities ETFs Look to Join the Party 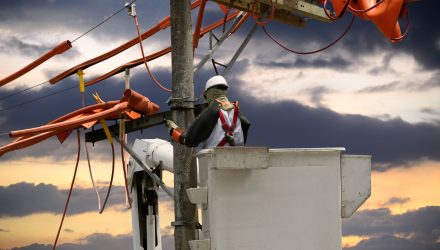 The S&P 500 is up more than 4% over the past month and more than 7% since the start of the fourth quarter, but the utilities sector is being left behind. Not all of the sector’s laggard status can be attributed to rising interest rates.

The Utilities Select Sector SPDR (NYSEArca: XLU), the largest utilities sector exchange traded fund, is lower by 3.3% over the past month and barely higher during the fourth quarter. XLU recently fell below its 20- and 50-day moving averages.

XLU yields about 3.3% on a trailing 12-month, making it and rival utilities ETFs popular alternatives to lower-yielding bond funds. The sector, one of the smallest sector allocations in the S&P 500, is also one of the least volatile.

“It’s not that utilities won’t get a tax cut like everyone else—they will. But because they’re regulated, most will be forced to pass the savings on to consumers in the form of lower power bills, says Williams Capital Group analyst Christopher Ellinghaus, rather than having it filter down to the bottom line,” reports Ben Levisohn for Barron’s.

On the note of tax reform, the benefit to utilities is muted because, as regulated industry, utilities will be forced to pass cost savings from tax reform onto consumers.