You are at:Home»Equity ETFs»Utilities ETFs Get a Lift From Solar Installs 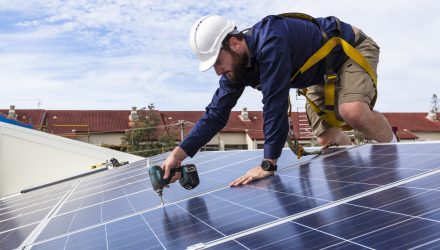 Utilities ETFs Get a Lift From Solar Installs

Amid the competitive threat from cleaner solar energy, many traditional utilities companies across the U.S. are getting in on the solar boom. That trend could provide a long-term benefit for utilities investments, including exchange traded funds such as the Utilities Select Sector SPDR (NYSEArca: XLU).

Recently, Morgan Stanley has upgraded the utilities sector to Outperform, arguing that stock prices aren’t keeping pace with earnings growth so far in 2018, which suggests the market participants may be subtly pricing in slowing earnings growth down the line.

“A record 8.5 gigawatts (GW) of utility solar projects were procured in the first six months of this year after President Donald Trump in January announced a 30 percent tariff on panels produced overseas, according to the report by Wood Mackenzie Power & Renewables and industry trade group the Solar Energy Industries Association,” reports Reuters.

Not Much Help for ‘TAN’ ETF

Interestingly, the increased solar installations are not helping the Invesco Solar ETF (NYSEArca: TAN), the largest ETF dedicated to solar stocks. That fund is down more than 16% year-to-date.

Solar panel prices were already falling this year, and the sudden drop in demand out of China may continue to pressure prices, especially with developers in other countries also delaying purchases in an attempt to drive prices down even lower.