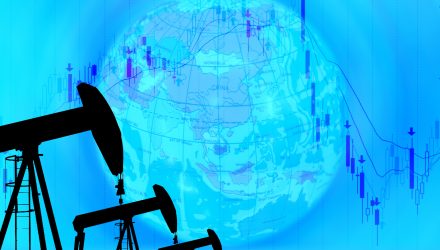 The United States Oil (NYSEArca: USO), which tracks West Texas Intermediate futures, slumped again Tuesday and is down more than 17% since the start of November. Ongoing declines for the benchmark oil exchange traded product are sparking activity in options on USO.

Entering Tuesday, USO was 25% below its 52-week high, putting the oil fund in a full-fledged bear market. USO was also nearly 16.5% below its 50-day moving average and almost 12% below its 200-day line, all of which can be seen as bearish signals.

By late in Monday’s trading session, “nearly 192,000 USO puts have been traded — three times what’s typically seen at this point in the day, with volume pacing for the 99th percentile of its annual range,” reports Schaeffer’s Investment Research. “According to Trade-Alert, one trader sold to open 156,000 January 2019 11.50-strike puts, for about $3 million. By doing so, the trader expects the oil ETF to hold above the $11.50 level through January options expiration.”

Further dragging on the oil outlook, OPEC and other forecasters have signaled that the global oil market could produce a surplus in 2019 on slowing demand, despite a dip in Iranian oil exports after U.S. sanctions recently went into effect.

“OPEC continued to reduce its forecast for oil demand in its latest monthly report, issuing its fourth consecutive downward revision to consumption growth for 2019,” according to CNBC. “The 15-member oil cartel forecasts the world’s appetite for crude will grow by 1.29 million barrels per day in 2019, down 70,000 bpd from its projection last month. The group has revised its outlook lower every month since July, when it initially forecast growth of 1.45 million bpd for next year.”