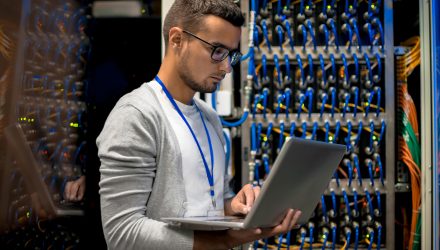 Shares of Chinese technology giant Tencent Ltd. (OTC: TCEHY) recently slumped, weighing on a slew of China technology exchange traded funds in the process. That is helping domestic technology ETFs, such as the PowerShares QQQ (NasdaqGM: QQQ), which tracks the tech-heavy Nasdaq-100 Index, extend leads over their China-focused rivals.

The Invesco China Technology ETF (NYSEArca: CQQQ) is lower by 17.57% over the past month. During the same period, is off just 0.58%.

“Seven U.S.-listed ETFs with at least $200 million in assets and a 13 percent cumulative weighting toward Baidu, Alibaba and Tencent are down double digits this year,” according to Bloomberg.

For its part, QQQ is dominated by the US-based FAANG stocks, among others. However, with technology’s ascent and that of QQQ, come concerns that the Nasdaq-100 is too heavily exposed to a small number of stocks. Additionally, some analysts opine that the benchmark’s significant technology overweight leaves it vulnerable should tech stocks fall out of favor. Due to tech’s ascent this year, QQQ’s exposure to the sector has increased while its consumer discretionary weight has been mostly steady.

A Big Lead for QQQ

“Meanwhile, funds with disproportionate exposure to the FANG stocks are up big in 2018 despite also getting knocked on Wednesday. The Invesco QQQ Trust Series 1, which tracks the Nasdaq 100 Index, saw its year-to-date outperformance of the Invesco China Technology ETF swell to nearly 40 percentage points,” reports Bloomberg.