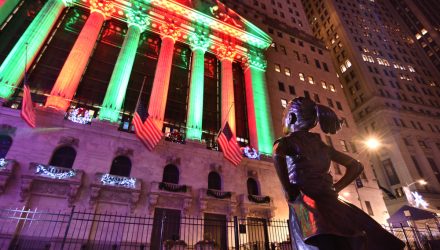 U.S. markets and stock exchange traded funds closed higher in half-day trading on Christmas Eve as optimistic traders looked to the coronavirus stimulus package, a Brexit deal and the quickening distribution of a vaccine.

The U.S. House of Representatives blocked President Donald Trump’s bid to change the terms of the coronavirus relief package and government spending package after he insisted on a $2,000 direct payments to Americans, compared to the current $600, Reuters reports. The spending bill will make another round through Congress for a majority vote to override the President’s veto on Monday.

“If (stimulus) doesn’t get passed in some form or another it could mean severe consequences for the unemployed,” Peter Cardillo, chief market economist at Spartan Capital Securities, told Reuters.

Garrett Melson, a strategist at Natixis Investment Managers, argued that the market’s reaction to the latest political strife is only short-term noise and investors are looking at the long-term picture.

“A lot of this is more bark than bite,” Melson told the Wall Street Journal.

The United Kingdom also reached a trade deal with the European Union on Thursday after months of negotiations, dodging the worst case scenario just days before completely breaking from the European trading bloc.

“(The Brexit deal) might be acting as a buffer for the market in the sense that it’s counteracting the negativity of the stimulus bill being stalled,” Cardillo added.

Meanwhile, over one million Americans have been administered the latest COVID-19 vaccination, but the coronavirus pandemic continues to spread in the U.S. Global leaders were also taking more aggressive measures to contain a more contagious variant of the virus in Britain.

“The market is so on edge at the moment. People are worried about more lockdowns, more travel restrictions,” Altaf Kassam, head of investment strategy for State Street Global Advisors in Europe, told the WSJ. “This will continue to bounce the market around.”