You are at:Home»Featured»U.S. Stock ETFs Retreat, S&P 500 Slips Toward a Bear Market 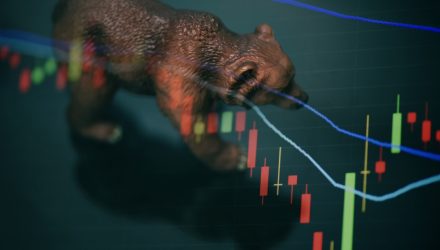 U.S. markets and stock exchange traded funds are reeling Friday, with the S&P 500 on pace to close in a bear market, as the major indices extend their longest weekly declines in over two decades.

The S&P 500 was trading 20% below its record closing high of 4,796.56 in January, and if the losses hold through the close, the benchmark would officially enter its first bear market since the Covid-19 pandemic first struck.

Furthermore, the S&P 500 benchmark was on pace for a seven-week long decline, its longest weekly losing streak since March 2001 while the Dow Jones Industrial Average was steering toward its eighth consecutive week of declines, the longest since 1923, and the tech-heavy Nasdaq 100 Index was also lower for the seventh week, its longest losing streak since 2011, Bloomberg reports.

“All of this has been driven by two major forces that were reiterated this week: one is inflation and how stubbornly high it is. And the second is how aggressive the Federal Reserve will likely be to get it under control,” Art Hogan, chief market strategist at National Securities, told Bloomberg.

The Federal Reserve is aggressively trying to rein in a four-decade inflation level, and the quickly tightening monetary policy outlook has fueled investor fears that the overzealous central bank interest rate hikes could trigger a recession.

Further fueling the recession fears this week, Target Corp. shares plunged the most since Black Monday in 1987 after Walmart Inc. suffered a similar move on signs that inflation is weighing on the consumer spending and eroding profit margins.

“The Fed has been a primary driver of these market declines, but the latest news from retailers has added additional concerns to the outlook for the economy,” Adam Phillips, managing director of portfolio strategy at EP Wealth Advisors, told Bloomberg. “Now that we’ve breached the 20% level, the big question will be where do we go from here?.”